Projectors without rainbow effects are not impossible to find. While the effect does not bother some viewers, many people find it particularly troublesome. The only option to get rid of this absolute deal-breaker is to get a new projector that works to solve this problem.

The rainbow effect is pretty much exclusive in single-chip DLP projectors. The reason is that this projector type uses a color wheel to create all the different colors needed for an image. The process results in the appearance of rainbows on the projected image.

Here is a quick look at the 7 best projectors that do not have the rainbow effect. Also, check out my top picks for projectors based on budget.

Product prices and availability are accurate as of the date/time indicated and are subject to change. Any price and availability information displayed on [relevant Amazon Site(s), as applicable] at the time of purchase will apply to the purchase of this product.

Prices pulled from the Amazon Product Advertising API on:

Back then, people did not have a choice. They had to watch their favorite shows on projectors with rainbow effects.

Fortunately, today’s technology allowed experts to create projectors that no longer depend on color wheels, thus eliminating colors that flash momentarily on the screen.

Most old projector models are single-chip DLP projectors. But now, there are different projector technology such as:

If you want to enjoy watching films in your home theater, these projectors are worth having: 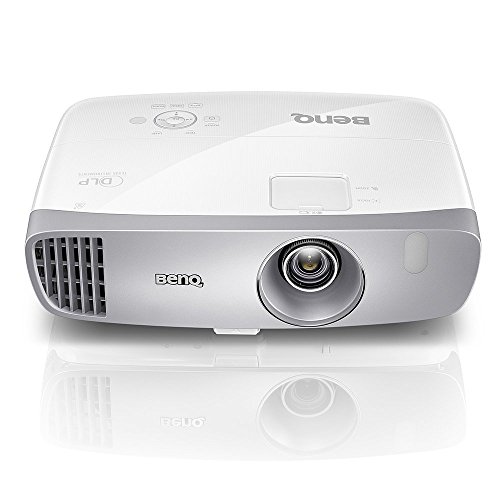 This projector is the best you can get at an affordable price. It boasts itself for producing a bright picture that has life-like colors and excellent contrast. With darker blacks, bright whites, and accurate colors, this projector can make pleasing images.

What is even better is that it has a small amount of vertical lens shift. Such is something that you can rarely find in budget-friendly projectors and is nonexistent in single-chip DLP projectors.

The BenQ HT2050A has a native resolution of 1080p and a lumens spec of 2,200. Per the connectivity, it features two HDMI inputs, a USB port, and audio input and output. On the other hand, the PC input is Analog RGB.

Additionally, the projector has RS-232 and a 12-volt trigger. Both are useful for people who have more elaborate home theater systems. 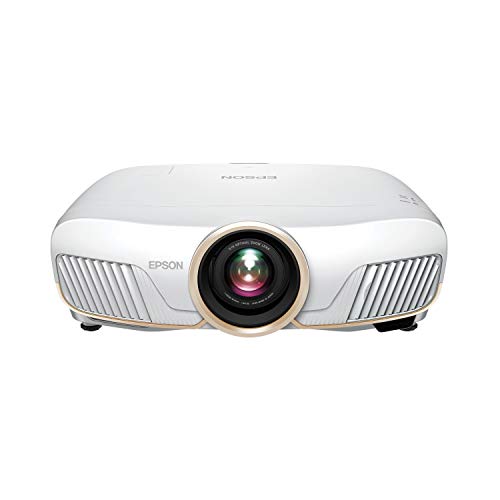 The Epson Home Cinema 5050UB features a great contrast ratio, excellent brightness, and superior color accuracy. For this reason, it is one of the perfect choices for serious home theater enthusiasts.

Notably, the 5050UB uses an LCD light engine instead of the DLP, which you can find in most projectors in the market.

This projector has a motorized lens that has both horizontal and vertical lens shifts. It also features ample zoom.

More than that, its 4K enhancement technology provides a lot of details. For this reason, it offers a significant step up when it comes to picture quality.

Moreover, this Epson projector offers 4K native resolution and HDR compatibility. It has a 2,600 lumens spec with 2.1x motorized zoom.

Additionally, it uses a lamp to project images with a lamp life of 4,000 hours. 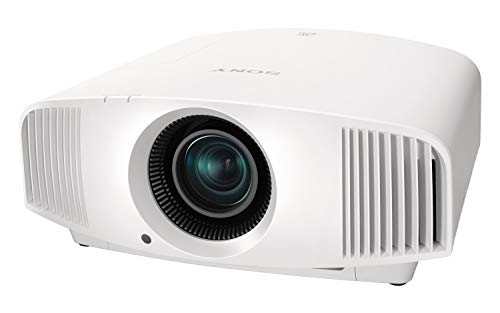 Moreover, the excellent contrast lets Sony make an image that looks very realistic. As a result, the images have more apparent depth.

You can consider this projector by Sony as the OLED TV of projectors. Its resolution is 4,096 x 2,160p and features HDR and 4K compatibility.

Despite the price, this projector is not that bright as it has 1,500 lumens.

In the digital cinema sense, Sony’s 325ES is a genuine 4K projector. It offers a 4,096 x 2,160 resolution and an additional 552,960 pixels over Ultra HD projectors with black bars on either of the sides. 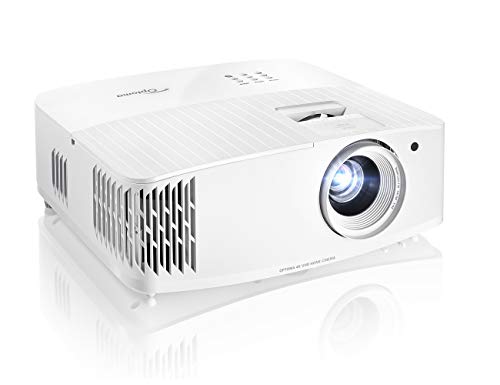 Some people want the extra detail the 4K projectors offer. However, this feature sometimes sacrifices the projected image’s colors and brightness. But things are different with the UHD35 by Optoma.

This 4K projector possesses relatively accurate colors and is better than other 4K projectors.

The UHD35 is a 4K projector that can accept signals up to 60Hz. What is even better is that it can also support 1080p resolution up to 240Hz. Such is beneficial if you have a gaming rig that is capable of this framerate.

Despite being a single-chip DLP projector, this one by Optoma does not produce a rainbow effect. It uses the Xpanded Pixel Resolution (XPR) technology, which is commonly known as fast pixel switching. This technology is responsible for preventing the rainbow effect.

This 4K projector is perfect for home theaters. Apart from excellent images produced, this projector has boosted audio and an intense brightness level of 3,000 lumens.

Additionally, it focuses on sports broadcast, allowing it to stand out from other projectors available in the market.

Along with the exceptional HDR of this projector are its contrast-heightening and motion-smoothing Sports mode. Such is perfect for individuals who want to watch sports games on a large projection.

The brightness level also makes vividly realized colors as well as instantly visible details. These images are detailed even when using the projector in the daytime or some ambient light levels inside your home theater.

Needless to say, the BenQ TK850 is a fantastic projector for every home. 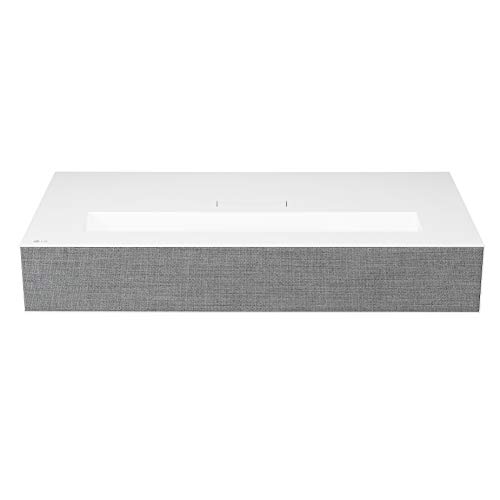 The HU85LA by LG is an ultra-short-throw projector that can produce a massive display even from only inches away.

True enough, it is more expensive than other projectors. However, you are getting what you paid for as this projector has increased convenience and advance technology. For this reason, it can project images at such a short distance without sacrificing the screen size and image quality.

In addition, this projector is brilliantly sharp in terms of construction. It has a sleek rectangular shape that you can place even on your living room carpet without obstructing the image that it throws.

Alternatively, you can install the projector on the ceiling.

At just 2.2 inches away, the CineBeam will be able to deliver a screen size of 90 inches. If you place it 7.2 inches away from the screen, it will throw the image at 120-inch projection. 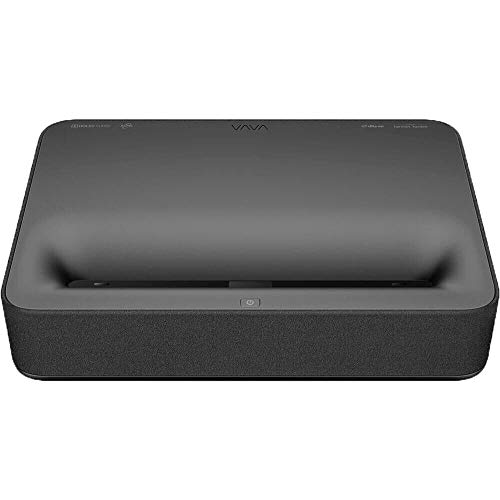 With an impactful HDR and rich 4K projector, the Vava 4K Laser Projector will never disappoint.

This ultra-short throw laser projector offers a massive display of up to 150 inches. The images look vibrant, thanks to the projector’s 2,500 lumens brightness.

Additionally, the sleek design of this projector, along with soft fabric covering, is an assurance that it is satisfying to the eye.

Despite being a new projector in the market, Vava’s 4k images, vibrant color, and ultra-short-throw picture make it an excellent choice for home theaters.

How Rainbow Effect on Projectors Form

Nothing can spoil you from watching a good movie in your home theater like colored lights flashing on your screen. These infamous flashes of blue, green, and red that momentarily show on screen are known as the rainbow effect.

People also call the rainbow effect color breakups, described as brief stints of successive flashes of light. They occur more so when the projector shows bright objects on the screen.

Moreover, rainbow effects occur on a wide range of DLP projectors equipped with only a single chip. The reason is that such a type of projector uses separate chips to produce the colors blue, green, and red consecutively. The projector displays all of the full colors through this process before going over to the following image.

On new projectors, this color reproduction occurs at undetectable speeds. For this reason, viewers can see the produced colors as a single image.

Meanwhile, you may often notice a rainbow effect on the images projected by older or cheaper projector models.

The reason is that they have slower color wheels. The production of rainbow flashes occurs primarily when a bright white light image shows up on the screen.

The projector creates white light images by flashing all three colors at the same time. As a result, the rainbow distortion becomes visible.

Generally, all DLP projectors show a rainbow effect. But the effect is more visible in older and cheaper models because they have slower rotating balls.

On the other hand, newer models have fast-rotating wheels, which reduces the chances of the projector exhibiting this effect.

Furthermore, the rainbow effect only affects a small portion of projector users. But for these people, the flashing colors on the screen can be troublesome.

For people who are susceptible to this effect, watching a movie using a projector may be unenjoyable. On the other hand, mildly sensitive people may only notice the light strobes when they focus on them.

In addition, mildly susceptible people can learn to live with the rainbow effect that their projectors make. With practice and exposure, they will stop noticing the flashing colors on their screens soon.

How Do I Stop the Rainbow Effect on My Projector?

The rainbow effect is a projector phenomenon that affects only a portion of people who use projectors. But if you are one of those people, the flashing colors on the screen can be alarming for you.

Instead of viewing a crisp edge to the image, you will see some color artifacts.

On the other hand, those who are not highly susceptible to the rainbow effect only see it when they make vigorous head movements.

In addition, the effect is more noticeable when a light source contrasts sharply against the image’s dark background.

The only way to get rid of the rainbow effect is to get a new projector for most people. But if you still do not have such plans, there are some methods that you can do to stop your projector from producing a rainbow effect.

To reduce the rainbow effect on your projector, you can:

Reducing the brightness of the projector’s bulb will lessen the white light that hits your single-chip DLP projector’s color wheel.

On the other hand, reducing its brightness will make the color flashings less visible. The same thing happens if there are some levels of ambient light in your home theater.

For many projector users, their brains will adjust to seeing flashes of color on the screen. When that happens, the rainbow effect will no longer be noticeable.

However, if you want to ensure that you do not experience disturbance while using your projector, the best thing to do is avoid buying a single-chip DLP projector.

Is there a rainbow effect on laser projectors?

Is an LCD projector better than DLP?

If you are highly susceptible to the rainbow effect, an LCD projector will work better for you as it has richer color dynamics than DLP, even in ambient light. It also throws less heat and is quieter.

In addition, an LCD projector produces sharper images than the ones produced by DLP projectors.

Do LED projectors use color wheels?

An LED projector does not use color wheels, but it sequences different LED colors on and off rapidly. If the on and off sequence is fast, it is less likely to see the rainbow effect.

Additionally, most LED projectors do not possess enough RBE effect for people who are highly sensitive to the rainbow effect to see.