I feel that soundbars are a contentious topic in home theater circles because proper audiophiles argue that the sound isn’t as good as surround sound speakers. However, soundbars are useful for saving space and still have plenty of versatility.

One feature that’s always useful on a set of speakers or a soundbar is a headphone jack, as this allows you to hear the audio without bothering anyone in else. In this article I look at whether you can get home theater soundbars with a headphone jack, along with some of the best models on the market.

Best soundbars with a headphone jack

Here are my top picks for soundbars with headphone jacks along with links to their listings on Amazon.

Also check out my top recommendations for soundbars (overall).

These are a sample of some of the best soundbars with headphone jacks, but there are plenty more available. Hopefully this list should give you a good starting point. 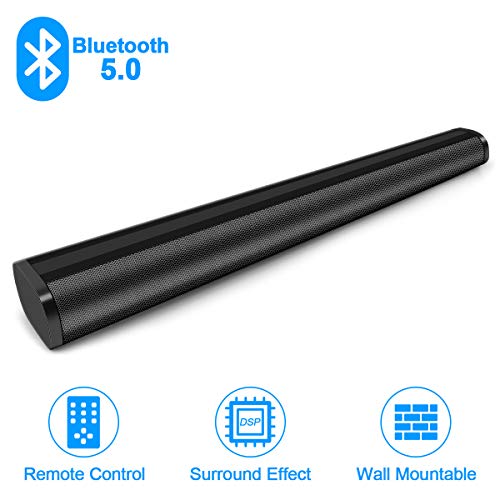 This soundbar from GRC (Amazon) is a good place to start because it’s reasonably priced and offers a range of great features. It claims to offer 360-degree sound from its 4 speakers, and while it’s not as good as surround sound, it’s fairly effective.

The soundbar has the necessary connections, including 3.5mm audio jack, HDMI, optical, and RCA. Also it has the ability to connect USB cables and even has a Micro SD slot too, giving you a range of functions. Most importantly, it also features Bluetooth connectivity.

Aside from functionality, this is a fairly attractive soundbar. It has a sleek design that’ll go fairly unnoticed in your home theater, and should fit quite nicely under your TV. That said, it’s also wall-mountable, so you’ve got plenty of options for where to put it.

The GRC soundbar has a built-in processing chip that can equalize sound for different media, including news, films, and music. However, I never find that this is particularly useful, as those who know enough about sound equalization would always rather set it themselves (something you can do on this soundbar). 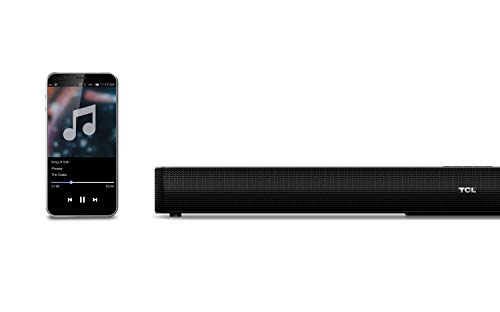 This soundbar from TCL (Amazon) is another fairly good entry-level model that comes in at just under $50. For that price you get a 2.0 channel system with built-in bass ports, meaning you don’t have to lose out on deeper bass tones.

It has a 3.5mm headphone jack, along with Bluetooth, optical input, HDMI, and USB. Overall it has all the necessary connections to provide decent audio for the TV, along with the option to listen through headphones.

The design is sleek and won’t be too noticeable in your home theater. I feel it looks best put under the TV, but it also comes with the option of being wall mounted.

More importantly, this soundbar is really easy to use because you just plug it in and go. Complicated setup is never a good option, so this will save loads of time. Also, the brand makes several other options, including ones with external subwoofers if you want a real bass boost. 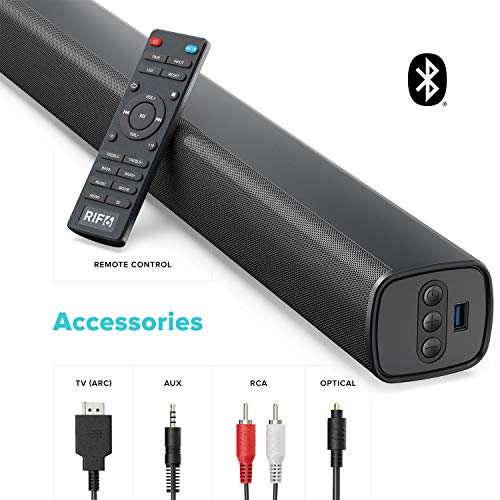 Although most soundbars come with their own remote control, this soundbar (Amazon)also has the benefit of an LED screen, so you can control the sound options directly on the device, rather than through your TV.

It has the coveted AUX headphone jack, along with the other necessary connections, such as HDMI, RCA, optical and Bluetooth. However, unlike some other models it doesn’t feature USB connection, but this isn’t a big loss.

This soundbar has 2 built-in subwoofer speakers, meaning it can provide fairly deep bass at high volume. It also claims to offer 360-degree sound, but this isn’t a particularly effective feature, so isn’t worth shouting about.

The sound quality is still good, but don’t expect true surround sound. Like other models it features digital processing and equalizer settings, but again these aren’t worth considering because they just clip the audio, particularly at high volumes. 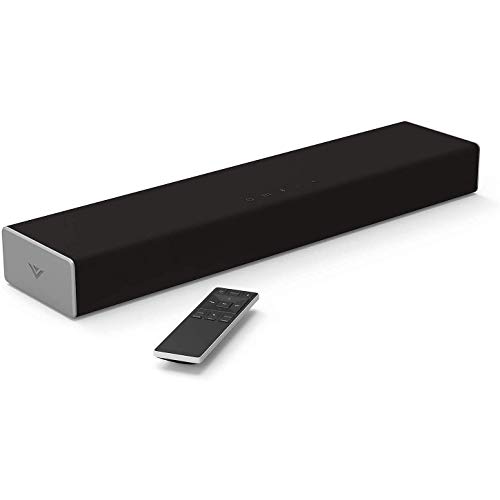 Unlike the other soundbars featured so far, this one (Amazon) has an external subwoofer. Even better, the subwoofer is wireless, meaning you have plenty of options for where to place it in your home theater.

The benefit of a separate subwoofer is fairly obvious: it provides richer bass. This soundbar is a good middle ground between a soundbar and surround sound system because you’re getting a major step up in bass from your TV’s speakers.

The JBL has all the input connections you need, including AUX, USB, HDMI, optical and Bluetooth. It has 300W of power, which means it can pump out some serious volume with little drop in audio quality.

Although the wireless subwoofer might complicate things, it’s still fairly easy to set up. The longest part is connecting the subwoofer, but the actual soundbar only needs to be plugged in and you’re ready to go. 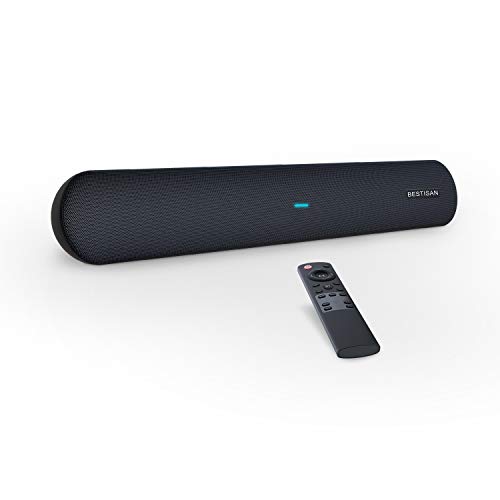 The standard option for this soundbar (Amazon) is slightly smaller than other featured on this list (28 inches), but there’s another option that is 40 inches. The smaller version should be fine for most small and medium-sized rooms, but you might want to make the upgrade if you can afford it.

It comes with all the input connections you need, including AUX and Bluetooth, along with optical and HDMI options for the TV. This works fairly well as an all-round home theater soundbar, and can handle music as effectively as TV audio.

The soundbar features 2 x 3-inch full range speakers, along with 2 bass ports that result in fairly round sound. Considering this is an entry-level model, you could do a lot worse than this soundbar.

The only real downside is the equalizer settings, which I feel do more harm than good. However, as with other soundbars, you don’t need to mess with these settings if you don’t want to. 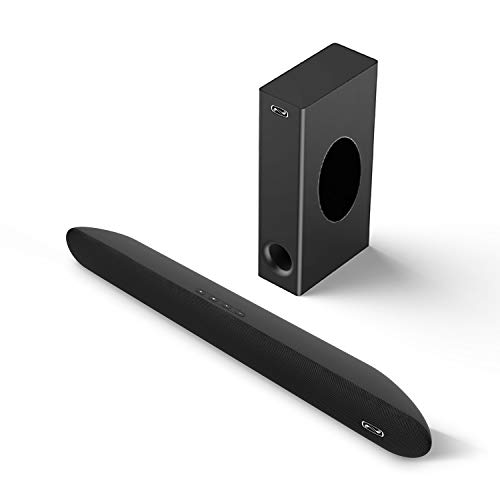 This soundbar (Amazon)is another with an external subwoofer, although this one is wired. I don’t feel that makes any difference to functionality, as your subwoofer likely won’t be too far away from the soundbar anyway.

In terms of performance, this soundbar has fairly good audio quality, which is improved by the external subwoofer. The soundbar itself features 2 x 3-inch full range speakers and 1 x 1-inch tweeter, meaning the sound is fairly rounded.

However, this soundbar isn’t as attractive as some of the others, and is a bit bulky considering it’s a new model. This might not impact your decision, but is definitely worth noting.

It’s easy to set up, as it just needs to be plugged in, and it has all the necessary connection options you’d expect. It also has some good equalizer options, not including its pre-set modes.

What to look for in a quality soundbar with headphone jacks

It’s worth noting down the important things to look for in a quality soundbar (along with the obvious headphone jack).

This list isn’t exhaustive, but should just serve as a guide to get you in the right frame of mind when shopping around. As with all other home theater tech, it’s worth noting your needs before purchase so you can pick the right piece of equipment.

Although some home theater pros are against the idea of a soundbar, they are useful pieces of technology. Along with them being more compact, they can be a great way to improve the sound quality of your TV without spending too much.

Here are the most important things to look for in a soundbar for your home theater:

It always makes sense to start with price, as this is one of the most important factors for most buyers. If you’re looking for a soundbar that specifically features a headphone jack then you’re going to be slightly restricted in price, simply because you can pick any one.

That said, there should still be a nice price range of soundbars with headphone jacks. The least expensive I’ve found so far are around $50-60, which is probably the least you’d want to pay for a soundbar anyway. However, the prices will also go as high as you’re willing to pay.

I wouldn’t really bother going above $150-200, as anything above this price would be money better spent on a surround sound system. However, soundbars with high-quality speakers can run into the thousands, but this is a bit much just to pay for a headphone jack.

Many soundbars feature a headphone jack along with other input/output sources. I’d recommend looking for a soundbar with coaxial and optical inputs, as these will provide the best sound and should mean you can still plug headphones in.

Another common feature that comes in handy is Bluetooth, as this will allow you to connect phones and mobile devices for music. While this isn’t a completely necessary feature, it does come in handy if you’re looking for a universal speaker system.

Probably the most important thing about a soundbar is the speaker quality. Obviously they’re not going to be as impressive as surround sound speakers, but a soundbar from a reputable company like Bose will still have some power.

Many soundbars are 2.0 channel systems, meaning they don’t have an external subwoofer. The subwoofers are instead built into the main speakers, which helps to save on space and doesn’t compromise loads on sound quality.

However, if you’re looking for truly rich bass and an immersive sound experience, then surround sound will still be the best option. Soundbars are a great first step up from standard TV speakers, but don’t necessarily expect wonders from them.

As you can see, there are plenty of soundbars that feature headphone jacks. This is by no means a full list, but should be enough to get you started. Just remember that audio performance is always the most important thing, and looking for a headphone jack should never be prioritized over this!