Down firing subwoofers can be placed on almost any dense surface, in the corner or mid-wall, and can sit at 8-12 inches above the ground. However, finding the best placement for your down firing subwoofers in terms of sound quality is going to take some trial and error- even if you go by standard recommendations.

But, with patience, determination, and the right guide to help you along the way, you can capitalize on the benefits that down firing subs can offer you and your sound system. Let’s take a closer look.

But before that, check out my front firing subwoofer placement guide.

Down Firing Vs. Front Firing Subwoofers

Before we take a closer look at where and how to place your down firing subwoofer, it is important to clarify the distinguishable differences that these have from more commonly used front firing subwoofers.

Since down firing subwoofers are unique in their design, this will also affect how they should be placed in your home theater or media room.

If you were to imagine leaving a water hose pointed downward on the floor, you would watch as the rest of the room filled with the puddle.

Similarly, in the case of the down firing subwoofer, you will find that the audio signals run across the floor before bouncing in other directions. This allows for an even distribution of sound throughout your media room.

However, in contrast to the water example, the low-frequency bass tones emitted by a subwoofer will not be absorbed in the same capacity- even by thick carpets- so you do not have to worry too much about the type of flooring you have unless the floor is not interlocked and the sound can seep through the membrane and, for example, “leak” into the room below.

Still, going back to the water example, a front firing subwoofer would act more like a fire hydrant as it blasts the low-frequency audio signals outward into the open air.

In this example, the water would blast in a straight line from the fire hydrant until it reached another surface. Then, it would consequently spray in varying directions depending on the force of the hydrant and the objects that the water came into contact with.

Similarly, with front firing speakers, the low-frequency audio signals are sent straight out and are spread throughout the room as they bounce from wall to wall (and along any other objects that come in the way such as lamps, ridges in the paint on the wall, and more.

Knowing the difference in the direction that the subwoofers fire directly relates to their positioning. While front firing subwoofers depend on the reverberation of the audio signals they send out directly on the walls nearby, audio signals sent out by down firing subs have more immediate contact with the floor and then fill the rest of the space.

Type of Flooring For Placement Of Down Firing Subwoofers

It is time to take a look at the flooring that down firing subwoofers should be placed on.

Down firing subwoofers can be placed on almost any surface as long as the flooring is “sealed” and does not have cracks that the audio signals can seep through. This means that a down firing subwoofer can be placed on carpet, wood, cement, or any other surface as long as the floor is solid and does not act as a permeable membrane that allows audio to escape.

This might make you wonder if the subwoofer can be placed on carpet. After all, carpet is known to be absorptive, so will it not absorb the bass of the subwoofer?

Fortunately, carpet is not able to absorb or block the low-frequency audio signals sent out by a subwoofer due to their incredibly low range of frequency.

Because of this, you can place a carpet, throw rug, or another padded surface down on the floor directly underneath the down firing subwoofers, and you will still have incredible results.

In fact, some people even suggest placing a small rug underneath the down firing sub to prevent the sub’s movement from causing reverberation that could distort the sound.

Still, you can also use a hard surface like wood or cement and expect the echo of the low-frequency bass to be encapsulated and broadened in an effort to enrich the bass audio experience.

Some audio tracks are designed in this way to be able to truly build off of the bass that is sent throughout the room and it works best on harder surfaces.

With that in mind, the most important thing to remember about the floor or surface that you place your down firing subwoofer on is that it should not be permeable.

If you were to place your down firing subwoofer on a permeable surface (think boards with slats that sit above an unfinished basement, for example), then the low-frequency audio signals would not be absorbed but would be cast out through the permeable membrane never to return again.

To avoid this, just be sure that the room that you are setting up to use your subwoofer in has a dense (at least 6-inches thick) floor that is interlocked and will not allow audio signals to escape through.

Where Should a Down Firing Subwoofer Be Placed? 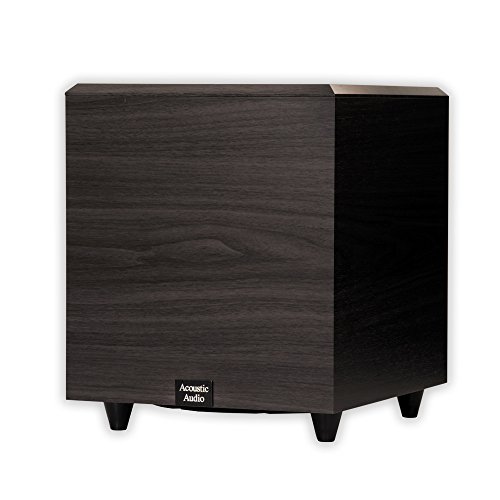 Now that you recognize the type of flooring that a down firing subwoofer can be placed on (just about anything as long as it is not permeable), it is important to take a look at where in the room this piece of sound equipment should be placed. After all, you know that it can rest on the floor, but which part of the floor should it rest on?

A down firing subwoofer can be placed on the floor in the corner or mid-wall depending on the acoustics of the room. Placement in the corner embraces the walls to send out the audio signal evenly in more directions throughout the room. However, placement mid-wall allows the bass to carry more closely to the front speakers and avoid timing overlap.

Along with this, it is important to note that a down firing subwoofer will likely have its own post legs, but it can be placed directly on the floor so that the top part of the subwoofer is roughly 8-12 inches off of the ground.

You may also raise your subwoofer, but this is not required for a down firing sub, and it might not help it at all since the audio signals will need to first hit the floor before being sent into the open air with this device.

To test for the best placement of a down firing subwoofer in your media room, you can do a frequency sweep with an SPL meter that will allow you to chart the frequencies and curves that hit in various locations throughout your room.

This can be a slow and tedious process, but doing so will allow you to graph the details of the frequencies that are being captured by your bass and sent out in the specific acoustics that your room offers.

Along with this, you can also do a few trial placements to see what naturally sounds the best. Since all rooms are different and have different obstructions that will affect the sound of the audio signals being sent out, it is important to try out a few different locations in your media room to see what works best for you.

Following the Cardas recommendations of 1:1.618 ratio from adjoining walls is a great place to start, but following this diagonal can only be helpful when paying attention to the specifications of your own media room and how these affect the placement of your down firing subwoofer.