To get the most from the audio in your home theater setup, you’ll want to get a high-quality audio video receiver. They’re a necessary addition if you want to add surround sound, wireless speakers, and if you have a wide array of different audio and video sources.

After hours of exhaustive research and testing here are my picks for the top home theater receivers in three different budget classes. 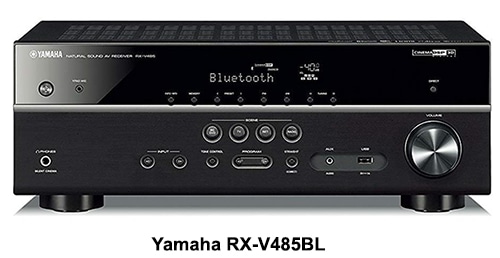 This unit impressed me with its sound quality, its versatility, and its feature set, which includes a few features you generally only find on more expensive receivers.

For the price, it offers most of what an entry-level home theater enthusiast wants. It’s a solid addition for any low to middle-end home theater system and beats out the competition in its price class.

The usual suspects are here. The RX-V485BL supports four HDMI inputs, and one HDMI out, and 5.1 surround sound. You also get Wi-Fi, Bluetooth, and Apple AirPlay support.

On the video side, the list of supported technologies is short, but I was impressed with what is here. You get 4K HDR, Dolby Audio, and Dolby Vision, plus HDR10 and Hybrid Log-Gamma.  While there are others, you’d really need to revise your budget up in order to find them in a receiver.

The sound quality is good, with each channel getting 80 watts of power. For the price, this is fairly standard. The sound isn’t going to blow you away at high volumes, but it’s still quite good.

The feature I found most exciting is the unit’s support for Yamaha’s MusicCast speakers. These are the brand’s proprietary wireless speakers that can sub in for conventional wired rear speakers. This lets consumers easily add rear speakers to a surround sound system without the need to run wires around the room.

The setup process is a bit clunky, involving linking the speakers to the receiver through the MusicCast app, but once I had them connected, they performed flawlessly.

The unit includes a nice array of smart home offerings, including Amazon Alexa support, the MusicCast multi-room I mentioned a moment ago, and a host of apps like Pandora, Spotify, SiriusXM Internet Radio, TIDAL, Deezer, Napster and more.

Finally, Yamaha has included their exclusive Cinema DSP 3D technology, which uses digital signal processing and measured sound field data to create an immersive sound field experience that enhances the sound for both music and movies.

Overall I was impressed. The sound was rich and immersive, as promised. Watching ‘The Matrix’, I found that the deep throb of the sentinels’ propulsion systems had real character, and cut through the soundtrack.

The dialogue was clean and punchy. I could clearly hear faint audio soundtrack additions and the music was raw and appropriately meaty throughout the lobby scene.

I will say there’s a noticeable attenuation in the higher frequency ranges, but this is likely due to my trained ear. Most consumers will never notice. But this is to be expected on less expensive models.

If you’re not as enthusiastic about the Yamaha unit as I was, I would recommend the Marantz 1608 (see it on Amazon) as an alternative. This unit packs a few more features under the hood, including Dolby Atmos and 7.1 surround sound, but you pay more for it.

What downgraded this unit for me was the weak 50 watts per channel sound output. But in a small room, without blasting the speakers, this should be adequate.

In the under $500 category, receivers tend to focus on audio features, with video features running second. These units simply don’t have the requisite horsepower under the hood.

When you step up another $500, things change dramatically. High-end video features begin to appear, and any audio deficiencies suffered in the cheaper range are fully rectified.

This receiver really hums. I thought the sound quality was excellent, with good performance across the entire frequency spectrum.

At 100 watts per channel, the unit can push out a powerful sound. Plus it supports a wide range of video technologies and features great connectivity for all of your home theater devices.

We have Dolby Atmos support! With this addition, and support for DTS:X and 7.2 surround sound, the audio possibilities really blossom.

This unit offers a number of possible speaker configurations. You could build a standard 7.2 surround configuration or you could steal two of the channels to install a 5.2.2 Dolby Atmos setup.

If you’re looking for more prominent front speakers you can double up your amps. Or you could go with a standard 5.2 surround and place a pair of stereo speakers somewhere else in your house.

If you don’t want to hang speakers from the ceiling for a true Atmos experience you can utilize the SR5013’s DTS Virtual:X support, for three-dimensional sound effects without height speakers.

Wireless support is baked in with the inclusion of HEOS wireless and Apple AirPlay 2. You can stream music all around your house to wireless HEOS speakers and devices or any wireless Apple devices.

Video gets a premium treatment as well. This unit supports an impressive eight HDMI inputs, plus two outputs so that you can hook into a TV and a projector simultaneously.

A wide range of other audio and video inputs and outputs are included. All the HDMI ports support HDCP 2.2, 4K at 60 Hz full-rate pass-through, 4:4:4 Pure Color sub-sampling, Hybrid Log-Gamma, Dolby Vision, High Dynamic Range (HDR), plus 3D. It also comes with a capable upscaling unit that can render both SD and HD in full 4K.

Marantz’s SR5013 is a beast of a receiver. The sound quality is excellent, even at higher volumes. Listening to Miles Davis is a revelation. Particularly with some of the unit’s digital sound processing applied, you can swim in the music.

Bass response is fat and rumbling. The brightness of the horns peaks out above the liquid tones of the piano. The drums are crisp and responsive.

If I closed my eyes I could easily imagine that I was sitting in a smoke-filled jazz club in the mid-‘60s with Miles and the band live on-stage. And I really enjoyed playing around with the various possible speaker configurations.

The unit’s video performance was equally impressive. Upscaling from SD and HD to 4K gave extremely watchable results. Signal processing is clean, and I didn’t notice any artifacting. The 60 Hz 4K images were nearly flawless.

If the price tag on this Marantz unit is a bit too rich for your blood, you might look at the Denon AVR-X1500H (Amazon Link). It’s a few hundred dollars cheaper, is missing a few of the bells and whistles, but still delivers excellent sound and picture quality. 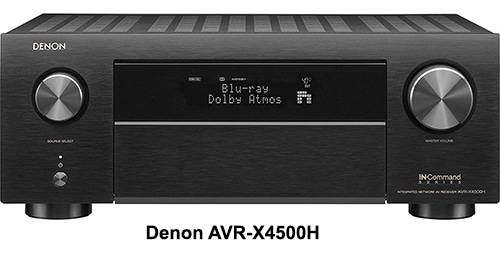 Now we’re moving into truly luxurious home theater receivers. In this category, you should expect premium picture and sound, with support for nearly every device and nearly every possible home theater configuration you can think of. For people building their dream system, these units are the proper complement.

You can connect nearly anything to this A/V wonder. Not only is there support for every modern and legacy connector, but there’s also a phono jack for connecting a turntable.

The sound quality will leave you breathless, particularly when you hook up appropriately powerful speakers to take advantage of the exceptional signal being passed out of the unit.

This receiver has it all. Eight HDMI inputs and three out. Every imaginable audio and video connector. Support for a host of smart home devices and a wide range of apps. Wi-FI, HEOS, AirPlay 2, Bluetooth, high-resolution digital audio file support, and multi-room audio and video support.

You get 9.2 channels with this unit with 125 watts per channel. You can opt for a monster surround system, or you can reassign extra surround inputs to deliver audio and video to up to two additional rooms. This gives you three zones of premium playback, with two zones at a time capable of playing different signals simultaneously.

Remember how much I gushed about the Marantz receiver? This is even better. The receiver’s exclusive technology improves dialogue, enhances bass response, and cleans surround channel levels when the volume is reduced. The audio is just beautiful from this unit and it bests the competition in its class.

As for video, this unit supports every technology we’ve discussed thus far in the other reviews and also includes Auro-3D® and IMAX Enhanced certification, which will improve playback quality for IMAX Enhanced content. There’s much more to talk about this unit. I just don’t have the space to mention everything.

As you can imagine this unit performs like a dream. The sound quality is bright and vibrant, with every little detail and nuance coming through clearly. Music seems to fill the room to staggering effect. Movies are cinematic in a way that you generally only find in a movie theater.

Watching The Matrix on this unit made me appreciate all the work the sound designers and composers put into the picture. Every mechanical whirr, bullet ricochet, grunt, crunch, and blast seems to reach out of the film and whisper directly into your ears. It was a tremendous listening experience.

And the picture quality was amazing, too. This unit is packed with so many quality features you may not be able to find a better receiver at any price (unless the price is very high).

Depending on where you buy this alternative, it may not actually qualify as sub-$2000, climbing just a bit over that price tag. But you can find it under $2,000.

The Denon AVR-X6500H (check price on Amazon) shares much of the same features as the X4500H, plus more. But it probably isn’t worth the extra money, which is why I featured the X4500H as my top pick.

Hi, I’m Jason. Welcome to Home Theater Academy, my blog. Building home theater rooms has been my hobby for a long time. Over the years, I have learned a lot about AV equipment and room acoustics. I’m excited to share what I have learned. Hope you find the information useful.