PCM (Pulse Code Modulation) and bitstream are two industry standards of sending audio from the player or transmitter to the receiver or speaker. It’s important to know which of these two is better because getting the right configuration for audio helps in getting more from your sound system.

Bitstream and PCM are capable of producing the same audio quality, and the only difference is how your setup decodes the compressed file. Compatibility with devices and supported frequencies are bigger factors to consider than sound and transmission when choosing between PCM and bitstream.

Some connections make better use of PCM than bitstream, while newer AVRs (Audio/Video Receivers) can take advantage of bitstream’s decoding process.

There’s more to it than just receiving and decoding audio streams, though. So let’s discuss everything in great detail and settle the bitstream vs. PCM debate for good.

The Basics of PCM

PCM refers to an algorithm that devices use to represent analog waves. This technology has been around for more than 100 years and remains the standard for transmitting audio streams.

Since PCM is an algorithm, it won’t matter whether you’re sending compressed or uncompressed audio files. When a device receives an input, it decodes the data then forwards it to your receiver.

LPCM settings on a PS4

Since PCM has been around since the beginning of the 1900s, it has become the industry standard for audio streams. Almost every device that converts digital to an analog audio output, and vice-versa, uses this technology to deliver audio files.

When configuring your sound system to a Blu-ray player, you’ll have the option to set the audio output to PCM. It means that your player will decode all the audio files, including Dolby, Dolby TrueHD, DTS, and DTS HD Master Audio.

Your player will then send these decoded audio files, uncompressed, to all the receivers connected to your home theater system.

As a result, your AVR doesn’t have to do anything with the audio file once it receives the input. It’ll only work on delivering these to your speakers for output.

We often use this type of connection for CD players, so most AVRs are compatible with PCM. It works well with analog and digital input, making it the most popular option for transmitting audio signals.

The Basics of Bitstream

Bitstream is a binary sequence—or what we often hear as 1’s and 0’s—that we use when converting audio input into digital bits. It’s the technology that PCM and other hi-res audio transmission used as a framework, but it doesn’t make this technology outdated.

Although you have fewer options when using bitstream for audio transmission, the sound output barely differs from PCM, and may, in fact, even provide you with more frequencies.

When you set a device to bitstream transmission, the player will transmit compressed audio files to the receiver. Your AVR will then decode the data for uncompressed output. We use this method to produce surround sound formats from the player to the AVR, AV preamplifier, processor, or power amplifier combination.

A receiver set to bitstream will activate the AV processor to detect any encoded surround sound format that it receives from the player. The processor will then decode the file based on the instructions that are in the signal.

Higher-end receivers may include a post-processing feature that converts the signal from digital to analog, making it possible to amplify the audio for better output. 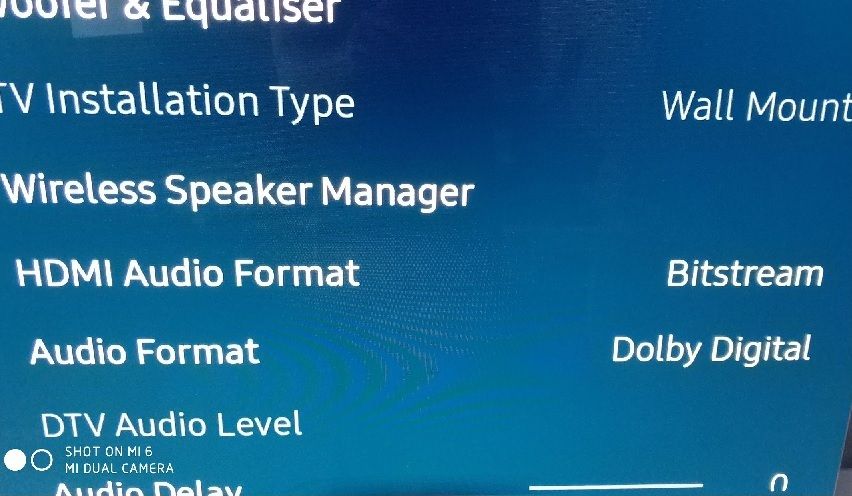 Since the files that your player transmits remain compressed, bandwidth won’t be much of an issue. So, when you use bitstream for a player that supports this transmission, you can take advantage of both wired and wireless connections.

It provides you with better options when setting up your home theater system, but it won’t work for most CD players. You always need to consider the compatibility with the device you’re using to take advantage of this transmission.

Bitstream vs. PCM – Side by Side Comparison

Both transmission methods have their advantages and disadvantages, but they don’t make one better than the other. In fact, if you’re going to use PCM and bitstream for the same audio format on the same speakers, the output you’re going to hear will most likely be the same.

What Happens When You Choose PCM?

Since HDMI is what most players are using nowadays, let’s be forward-thinking and say that you’re, most likely, going to use it for your connection.

If you’re going to set your Blu-ray player to use PCM as the audio output, the player will internally decode all the files from Dolby, Dolby TrueHD, DTS, and DTS HD Master Audio codecs, including every related soundtrack.

After that, the player will send the decoded, uncompressed audio signal to your receiver, then to your speaker for the output.

As a result of this setup, the player does all the work, providing you with untethered access to secondary audio, which is responsible for descriptive audio, audio commentaries, and supplementary audio tracks. If this is an important feature that you want to have for your sound system, then PCM is a better option for you.

Your options may be limited for PCM if you’re going to configure your sound system for digital optical audio or coaxial connection. It’s only capable of sending two-channel signals, so either may not have enough bandwidth capacity capable of handling the transmission of uncompressed hi-res audio output.

What Happens When You Choose Bitstream?

The process of transmitting files will be different if you’re going to use bitstream as the audio output for a Blu-ray player. The first thing that will happen is that the player bypasses all of its internal DTS and Dolby decoders. The player will simply transmit digital signals to your receiver, which will be responsible for decoding and converting it.

When you set the player for bitstream transmission, the receiver will process everything, then produce decoded, uncompressed audio files.

You don’t have to worry about the connection between your player and receiver. Wired or wireless bitstream transmission allows you to take advantage of higher frequencies, providing your sound system better potential to produce the best output.

The problem with bitstream starts when the program relies on secondary audio settings. If the file uses hi-res secondary audio formats such as Dolby TrueHD, DTS-HD, or higher, the receiver will downgrade it to Dolby Digital or DTS because it’s trying to squeeze both types of formats into the same bandwidth.

So if you’re going to use bitstream for programs that use hi-res secondary audio, the output will be limited to standard definition.

Similarities Between PCM and Bitstream

PCM and bitstream may seem very different in terms of the formats that they can produce, but both of these two configurations are capable of delivering high-quality audio. In fact, if you don’t need a secondary audio output or higher resolution codecs, there’s barely any noticeable difference between these two.

Whether you’re playing standard or high-res audio, your speakers will produce the same audio quality.

Aside from the output, both configurations work well with most DVD and Blu-ray players with no noticeable difference.

You can even find a lot of players today that will allow you to switch between PCM and bitstream connection seamlessly. AVRs work the same, but you have to make sure that the one you’re going to use can support both configurations to produce the output that you want for your speakers.

Differences Between PCM and Bitstream

If you’re only after the audio quality that your speakers can produce, both configurations are excellent. Sadly, setting up your sound system will never be as simple as that. There are dozens of different factors that you need to consider, and, sometimes, you might have to compromise one feature over the other.

The quality of the audio file that your player or receiver converts is the most significant difference between the two—don’t get confused with output quality with file quality.

PCM uses raw signals that your converter generates, and codecs, such as DTS or Dolby Digital, won’t affect its quality. On the other hand, bitstream works with coded audio files, but it can support more frequencies, allowing you to produce hi-res audio.

The process may differ, but the result will still be the same. With the availability of lossless compression methods, such as Dolby TrueHD and DTS HD Master Audio, bitstream can provide the same quality without the need for more space to transmit data.

Compatibility with devices and other connection options also differ for both configurations. PCM works well with almost every device, whereas bitstream may only work for devices that support hi-res surround sound format.

Aside from that, you’ll need a physical connection for PCM because the files that your player transmits usually take a lot of space, and it won’t be possible to send it over-the-air.

When Should You Use PCM? 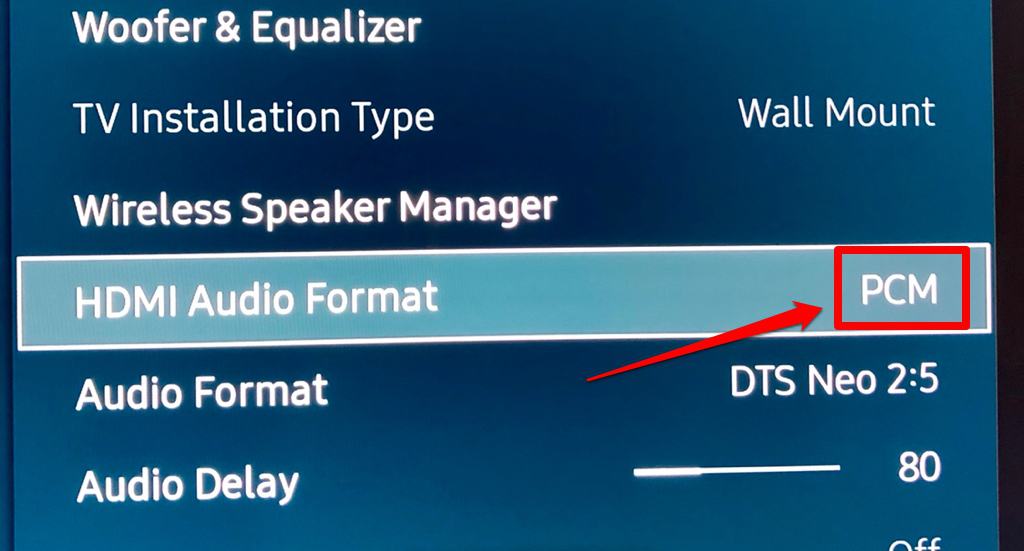 You should use PCM configuration if:

However, all of these advantages don’t make PCM configuration better than bitstream. One of the reasons is because PCM can only transmit a two-channel signal over a coaxial or digital optical connection.

Although not a deal-breaker, it could still be an issue for those looking for better transmission options, especially with the space capacity required by this configuration.

Another factor that you have to consider is compatibility. PCM works with almost every player that we’re using. However, since the player decodes the audio files, there’s a chance that you may not get the smoothest and lossless transmission, especially if you’re using a more sophisticated sound system for your media room.

So, the compromise when using PCM is: if you want to take advantage of better secondary audio tracks and lower latency, you may have to steer away from the idea of having a wireless connection or building a more sophisticated sound system.

When Should You Use Bitstream?

Bitstream is the technology that PCM used for its framework, but it doesn’t make it that much better or worse. The choice to use bitstream for your sound system would depend on how you want it to work, and whether various configurations can give you an edge over PCM.

Using bitstream for your audio is better if:

If you’re planning to use bitstream for programs that rely on secondary audio, then the output that you’ll get from it will be limited. It’ll still work, but it can only use standard definition, which may not go well with a setup that takes advantage of more frequencies.

Better audio output is possible if you’re using bitstream, but it’s not always the case. Many people will still hear the same sound quality from PCM and bitstream if they’re not using high-end receivers with better processing capability.

So, the compromise when using bitstream is: if you want to take advantage of bitstream’s capability to produce high-quality audio output and wireless connection, you may have to settle for standard resolution secondary audio.

Also, you might need to invest more in your sound system if you want to experience any noticeable difference with the output.

There’s no clear winner of the bitstream vs. PCM debate if we’re only going to compare the output that they can produce. The choice depends on how you want to configure your sound system and where you’re planning to use it.

If you want a setup that is capable of hi-res secondary audio, PCM is better for you. Both transmission methods can provide you with a hi-res output if we use mainstream sound systems. But if you’ve invested a lot to build a sophisticated sound system, then bitstream will let you take advantage of better audio codecs.