What do you do if you just got yourself a new flat-screen TV and a cool soundbar only to realize that the TV doesn’t have an audio output to connect the soundbar? Well, there’s no need to panic because there are actually other ways to connect a soundbar and enjoy the rich surround sound from your compact speakers.

Connecting a soundbar to TV without audio output requires digital cables, like HDMI and optical fiber. There are also creative ways of using devices like a set-top-box, HDMI switcher box, and signal converter. The method you pick depends on available ports on your devices and extra equipment you have. 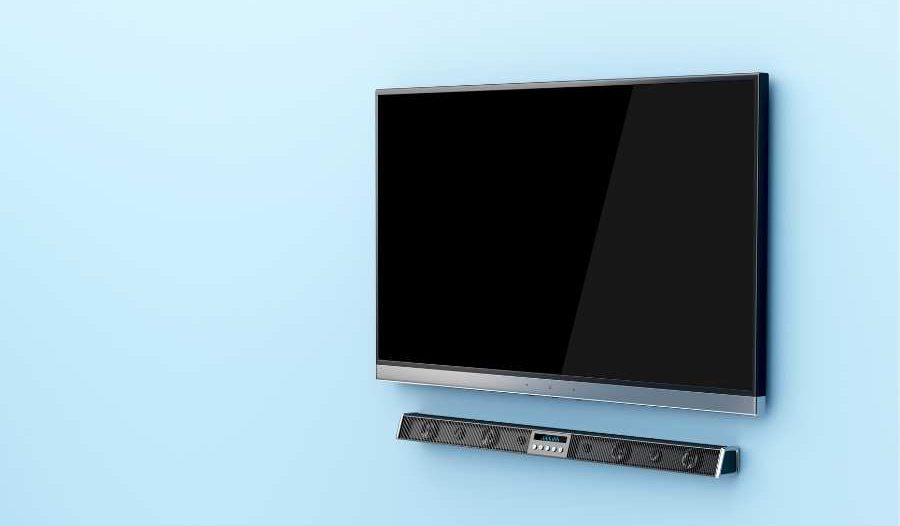 In this article, we’ll look more closely at these solutions that will ensure you can experience the full potential of your home theater. Let’s go.

Reasons Your TV May Not Have an Audio Output

First up, if you have an older TV set such as a CRT (Cathode Ray Tube) type or even an early flat-screen TV, then your device probably lacks both analog and digital audio outputs. That’s because before HDMI cables were introduced in the year 2002, TVs rarely had audio outputs of any kind.

So can you still connect a soundbar to an older TV set with no sound outlet whatsoever?

Well, you may think of taking apart the TV case, finding the speaker cables, and bypassing them to connect to your soundbar externally. Now, that would be quite a workload and would require some level of expertise. And even then, you are not guaranteed great sound in the end.

Worse still, this audio wire interception may damage your TV set, and then you’ll be in a worse position. So the best option would be to just upgrade your television.

But what about the modern flat-screen TVs with no audio output? Why is that so?

The most common TV connection through which sound signal is driven to other devices has been the RCA audio output. This is an analog sound output that has been in existence since the 1940s. But currently, analog outputs are slowly being replaced by digital audio outputs—the most popular being HDMI (High Definition Multimedia Interface).

To put it simply, advancement in technology is the most probable reason why you may fail to see that “Audio-out” label on your TV’s backside. Instead, there will be one or more digital ports, e.g., HDMI, SPDIF, optical, or USB, that you can use to connect your soundbar.

But even if your TV set has these digital audio outs, what if your soundbar only has the analog RCA port? No worries, there’s still a workaround, and we’ll be addressing that shortly.

Now that we’ve established that modern TV sets that don’t have an audio output have a digital sound outlet instead, it would be wise to first understand these digital audio outputs.

So, let’s look at the most popular types of digital audio output that you will find on your devices.

HDMI is the most popular and convenient digital audio output. Through the same port, both audio and video data can be transmitted from one device to the other through the HDMI cable. This dramatically reduces the number of cables needed.

HDMI can support high definition video and digital audio like Dolby TrueHD and DTS HD Master Audio. Because of this, it’s the most preferred output for not only HDTVs, but also soundbars, game consoles, DVD and Blu-ray players, and cable boxes.

Some HDMI connections include a feature called ARC (Audio Return Channel) that was introduced in 2009. This feature can greatly simplify your cabling needs. HDMI ARC offers two-way communication between devices. It serves both as an input and an audio output.

So the HDMI ARC enables you to have only one connection between your TV and soundbar or AV receiver while the TV is connected to other multiple sources like Blu-ray or cable box.

An optical audio output uses a fiber optic cable that transmits digital audio signals from the source to the receiver, e.g., from a TV set to a soundbar. TOSLINK is the standardized fiber optic connection system.

How does an optical cable work? From the signal source end of the cable, the electric signal is converted to optical light. It’s then transmitted through the cable, and once at the other end, the cable converts it back into an electric signal.

Through an optical connection, you can hear standard stereo audio or 5.1 surround sound transmissions.

However, fiber optic cables are not capable of carrying data over long distances, and that’s one of their disadvantages. Also, unlike HDMI, optical outputs don’t support high-quality audio like DTS HD Master Audio and Dolby TrueHD.

But apart from these shortcomings, optical outputs have the advantage of transmitting clear sound with less EMI (electromagnetic interference). There’s also limited data loss during transmission, and overall, the optical cables last longer than common wires. 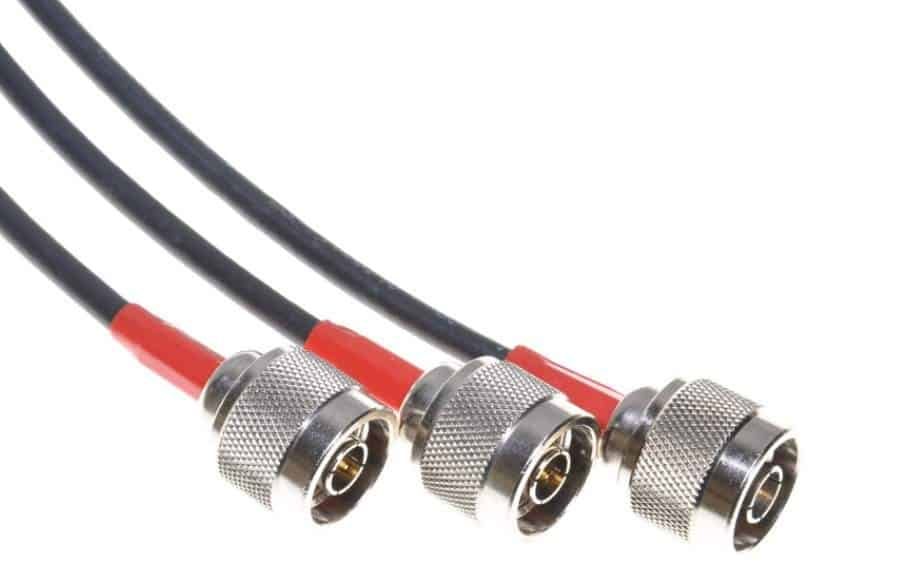 SPDIF (Sony Philips Digital Interface) is not a common digital output like the optical output. SPDIF coaxial can also carry digital audio signals from transmitters like TVs to receivers. It can support stereo, DTS, and Dolby 5.1 surround sounds. Another advantage is its limited data loss during transmissions.

The disadvantages of the SPDIF interface are its inability to support high-quality audios like Dolby TrueHD and DTS HD Master Audio, being prone to noise and interference, and the fact that it’s not a common connector.

USB audio outputs are common outputs but for computers and laptops. You can use this with USB-powered speakers and headphones. Users can also plug in Bluetooth transmitters and use wireless TV headphones to transmit sound.

Since USB audio outputs are not common on TV sets and other household devices, this will not be a major focus in this article.

Also read: 4 Ways to Connect a Soundbar to TV Without HDMI or Optical

How to Connect a Soundbar to TV Without Audio Output

So far, we hope it’s clear that what most people refer to as the “audio output” on TV sets is really the RCA sound output. Therefore, even without this analog output, you can still connect a soundbar to your TV through the digital interfaces available.

Let’s then dive into the main focus of this article, which is the various ways you can connect a TV without audio output to your soundbar.

As we’ve seen above, optical audio outputs are one of the most popular digital sound interphases in household devices like TV units. If your unit lacks the RCA audio output, you can use this digital optic connection instead.

And now you’re ready to go.

What if you want to use the optical cable, but your soundbar doesn’t have an optical audio output but only has an RCA out? In this case, you will have to use a digital-to-analog converter (DAC).

Here are the steps to follow in making this connection: 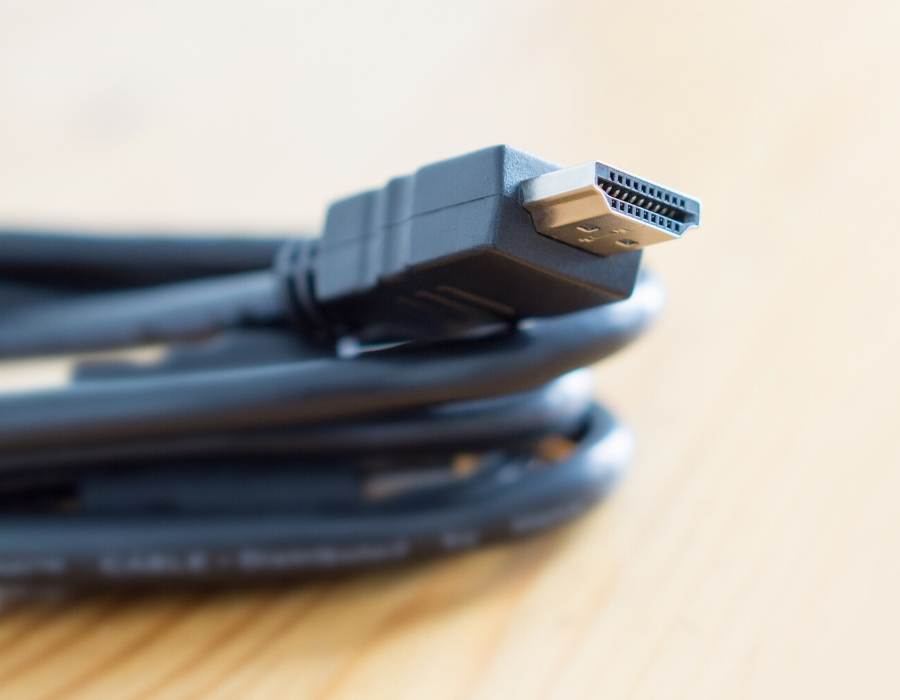 There are a number of scenarios for connecting HDMI cables to your TV and soundbar:

This can be quite confusing if you’re not used to the setup, so for a more detailed explanation, check out Crutchfield’s guide.

In the event that your TV has HDMI connectivity, but your soundbar does not, an HDMI switcher box will be necessary.

Using Audio Out From a Set-Top-Box

A set-top-box (STB) is also loosely called a cable box. This is a device that contains a TV-tuner input and displays output to a TV set. It’s also an external source of digital signals, allowing the signals to be received, decoded, and displayed on a television.

How to Connect a Soundbar and TV Set top box audio
Watch this video on YouTube.

The connections you’ve made allow video signals to go to the TV set while audio signals are directed to your soundbar.

This method does not require any connecting cables at all because Bluetooth is a wireless communication connection.

Even though Bluetooth was initially just found on smart mobile phones, it has progressively infiltrated the digital audio systems. Bluetooth headphones have become very popular lately, not to mention TV Bluetooth headphones. And now soundbars are also featuring this connectivity.

So, to be able to connect your soundbar to the TV using Bluetooth, you need to ensure the following first:

If everything is set, just switch on the Bluetooth on both of your devices, pair the two and start enjoying your music or movie. 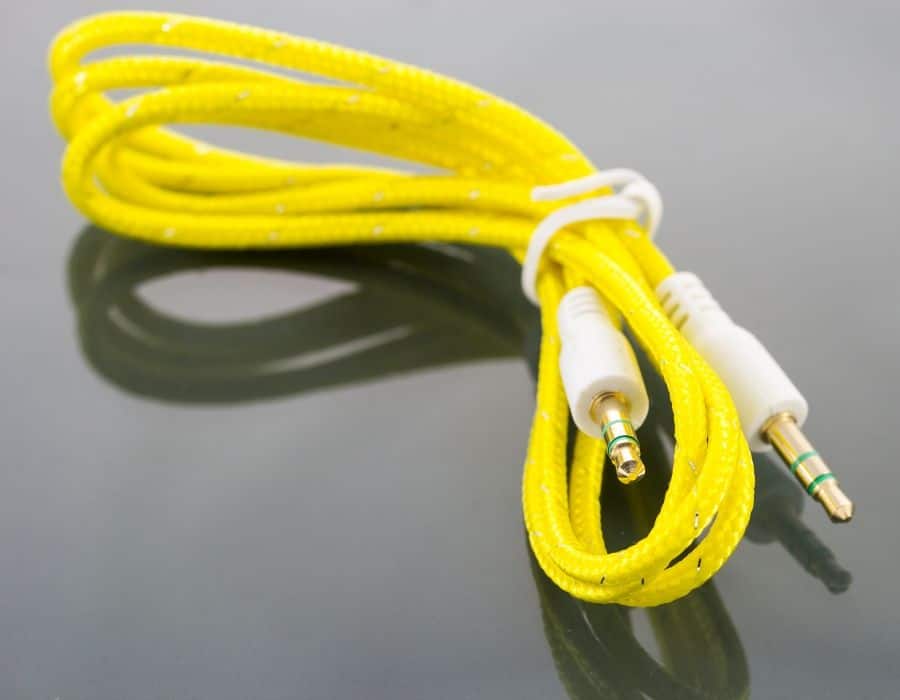 If none of the other connections are available, then using an aux cord through the headphone jack may be your other option. But one downside of this connection is that the volume tends to be lower and so the quality of sound may not be as good as you would like.

All the same, here are the steps to connect the aux cord:

With the advancement of sound technology and digital technology in general, many analog features like the analog audio output on TV sets are being phased out. For many people, this analog audio output is what they refer to as the audio output. As such, without this port, one may feel stranded and wonder how to connect their soundbar to the television.

Since there are many other connection ports available on TV sets, there are other ways of connecting a soundbar to TV without audio output. Most of these methods involve digital audio ports and cables like:

Therefore, there’s no need to worry if your TV set doesn’t have the well known red or white jack that is the audio output, try any of these other ways of setting up your bar and enjoy great music or films.