An HDMI audio extractor is what I use to set up my Xbox, Chromecast, and Blu Ray player into my TV and soundbar. Here is a detailed article describing what it is and how it works.

An HDMI audio extractor is a device that splits the audio and video signal from an HDMI source. It allows the audio signal to be sent to a 2-channel stereo analog source or a digital audio source using an optical S/PDIF jack that supports up to 7.1 Dolby digital surround sound and sending out an HDMI video signal. 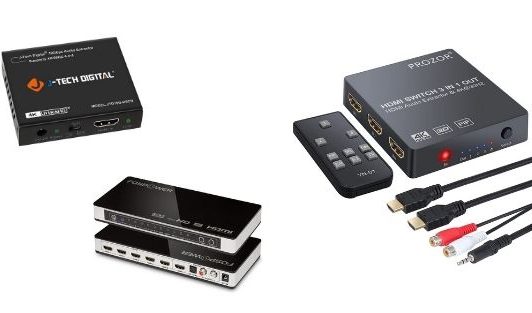 This article will cover what HDMI is so we can then get a clear understanding of precisely what an HDMI audio extractor is and how it works.

We will dive deep into how it works and look at what external and internal factors could affect its quality of video and audio signals. We will look at its specifications and features, allowing us to understand what options we have in terms of routing audio signals to different audio systems (analog and digital) and what audio quality we can expect.

HDMI stands for High-Definition Multimedia Interface. This is probably the most frequently used HD signal interface for transmitting both high-definition video and audio over a single cable.

It transfers as uncompressed video data and compressed or uncompressed digital audio data. It has replaced analog cables, which used to require separate audio and video cables such as VGA and audio jack cables.

EDID (Extended Display Identification Data) is the AV industry standard for your output display, your screen, TV, or projector. It automatically communicates with your AV source device (for example, your Amazon Fire TV Stick or DVD player). So as you can see, this is crucial in the implementation of HDMI.

HDMI is used both in the commercial AV sector and is most definitely the cable of choice for the home entertainment market. HDMI is used to connect digital TVs, DVD players, Blu Ray players, Xbox, Play Station, Apple TV, and more to other AV sources.

We are now seeing more and more AV devices use HDMI as the standard source of throughput. HDMI is even featured on PCs, MACs, Laptops, car infotainments systems, and many more.

What is an HDMI extractor?

Now that we know what HDMI is and that we use it for AV components to send audio and video signals across one cable, let’s look at what an HDMI extractor is.

An HDMI audio extractor is a device that is used in your AV setup that splits your HDMI signal, which contains both video and audio signals.

It allows you through analog audio jacks or a digital S/PDIF jack to separate and direct the audio signal into a new analog or digital source, enabling you to play that audio signal on a separate device.

In simple terms, you can split the HDMI audio and send it to another device, and that device plays the audio. This is great and Is used to integrate your digital home theatre system with your analog home audio system.

It can also send digital audio through an optical S/PDIF port to your digital home audio system if the HDMI extractor allows it.

How does an HDMI extractor work?

HDMI audio extractors also have the ability to extract 5.1/7.1 Dolby digital surround sound, which is sent through the optical jack. You can usually select which audio signal you would like to use via a mode switch.

A 2-channel stereo audio signal is extracted from your incoming HDMI cable and is put through both the analog audio output jack and the optical S/PDIF jack.

Depending on your audio extractor, 5.1 or 7.1 channel surround sound signal is extracted from your HDMI cable and put through the optical S/PDIF jack. This signal is best when used in conjunction with modern audio systems that allow for Dolby digital surround sound.

Hence, it would be best if you did not use the audio extractor to send HDMI audio to a surround sound system for the best sound quality.

How would you use an HDMI audio extractor?

We will go through a real-world example explaining the application of an HDMI audio extractor.

Let’s say you have these AV systems on hand

All you would need to do then is switch between your stereo signal when listening to music and then to your digital surround sound signal for movies via the mode switch. That’s it.

Do HDMI cables affect the quality of an HDMI audio extractor signal?

If an HDMI capable is built to spec and functions properly, there is no need to spend extra money on something fancy. This is because a digital transmission isn’t nearly as susceptible to interference as an analog connection. Hence it either works, or it doesn’t.

This doesn’t mean it’s a great idea to purchase the cheapest HDMI cable either. HDMI cables that utilize the correct construction materials can make a big difference with regard to high performance. 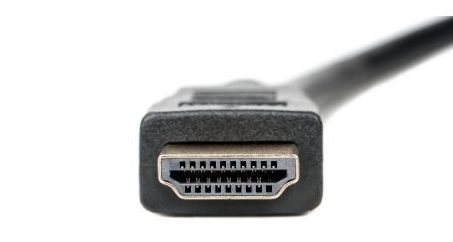 The good news is that copper cables are relatively cheap and you don’t need to get any fancier material than this, for example, silver-plated copper.

If you want your audio and video quality to be pristine, then a general rule of thumb is that your HDMI cable length should not exceed 1.5 meters with a thin 32-gauge wire.

However, if you increase the thickness of the wire, you can safely increase the distance accordingly. This can take you up to an 8m cable, which must have a 24-gauge wire.

The connectors on the end of the cable, if possible, should be gold plated if you can find it. This is not the external connector but the pins located inside the connector. Gold plated pins will give longevity to your cables and not necessarily increase their performance, however.

Does an HDMI audio extractor affect the quality of the audio and video signal?

The factors that would affect the audio and video quality would be the actual HDMI cables that are used (as we discussed). However, if they are made of copper wire and are the correct length, that will not pose a problem.

The next factor to consider is the sample rate. The sample rate is measured in kilohertz (kHz) and is how often an AV signal is received. A higher sample rate means better emulation of an analog signal.

Hence the only thing to consider is the sample rate of your HDMI audio extractor. If your audio extractor has a low sample rate, then the audio will not be of the highest quality; however, the notice in sound quality is negligible to human ears. Another thing to note is that your entire AV system setup will only work as well as the device with the lowest specifications.

This means if you have a device in your AV system that is sending a 48KHz signal and all your other devices are running at 192KHz, the entire system will only run at 48KHz.

The current HDMI version is 2.1, and since the inception of HDMI, we have had sample rates of up to 192KHz. The HDMI versions that come with an audio extractor should be equipped with HDMI 2.0, which means handling sample rates for 7.1 Dolby digital surround sound should not be a problem.

What makes a good HDMI extractor?

The IArk power switch allows up to 3 HDMI source devices (like PC, PS4, Xbox, Blu-ray player, cable box, DVR, Chromecast, Fire TV, Apple TV) to be connected to one HDMI port on your HDTV, monitor, or a projector. This audio extractor has an optical S/PDIF output that supports up to 5.1 Dolby Digital and DTS and has an analog RCA output.

This device supports an auto-switching function which can also be turned off, and it includes an IR remote for manual switching

The J-Tech Digital has a 2-channel analog stereo output or multi-channel Audio (S/PDIF) output. One thing to note is the unit will only pass Dolby Digital audio formats and will not decode these formats for the analog output.

If you do happen to use the analog output, make sure your source is set to PCM audio. It supports 4K Ultra HD with HDMI 2.0 as well as HDMI 2.0b (18Gbps) HDCP 2.2 and DVI. It supports 5.1 Dolby digital surround sound and has a sample rate of up to 192KHz.

It has a built-in input auto switch function that can be enabled or disabled as well as a built-in compatibility mode to support older versions of 4K displays.

It has three audio EDID settings and uses 2-channel settings for the stereo 3.5mm headphone output. Then it has a 5.1 Dolby digital setting for the optical audio output.

The Prozor is not only an HDMI 3×1 Switch with PIP function but also an HDMI audio extractor. It sports a 3.5mm to RCA cable and has three modes of audio output.

It supports HDMI version 1.4, which is a resolution of up to 4K 30hz. It is made from high-quality ABS plastic and features 24K gold-plated connectors to reduce signal loss.

It has a wide compatibility range and is suitable for various HDMI sources like Roku or Chromecast, Amazon Fire TV, PS3/4, Apple TV, Xbox, PCs, and more.

We conclude that an HDMI audio extractor is a must-have device if you need a way to separate your audio and video signals in your home entertainment system so as to route them to separate AV devices.

It can help bridge the gap between your home video system and your home audio system, by extracting the audio signal from an HDMI cable and sending it through a 2-channel stereo analog jack or an optical jack that can support up to 7.1 Dolby digital surround sound.

Depending on your needs, you can set up any AV system and route the video and audio signals to any device you like creating a home entertainment system that you will be emersed in.

There are many ways in which you could use an audio extractor. You can setup up, connect and link all your home entertainment devices (like your Xbox, PS4, Blu Ray player, DVD player, Chromecast, Amazon Fire Tv Stick, Apple TV) and everything in between.

We discussed and learned every function, detail, and feature there is to know about an HDMI audio extractor leaving no stone unturned, hopefully helping you understand it better and helping you decide if you require one for your home entertainment system or not.