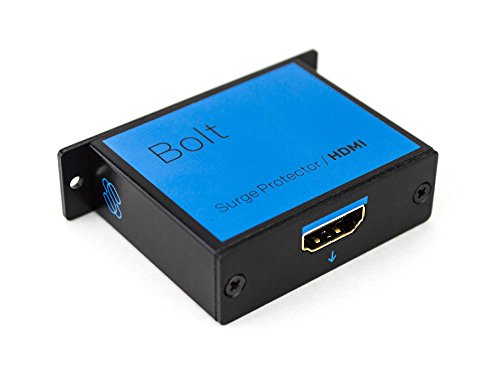 I think it’s important to understand what power surges are in order to understand whether you need to protect against them. Similarly, it’s worth knowing which are the best devices to install. In this article I’ll give you some information about getting the best surge protectors for your situation.

Surge protectors can be very useful when it comes to protecting your electronic equipment. Power surges can damage your electronics (sometimes beyond repair), particularly the sensitive ones. This includes things like the hardware in your receiver, and your HDMI cables.

So it would seem logical to install HDMI surge protectors in your system, right? Well not necessarily, as this might not be the best place to install your surge protection. As I’ve mentioned, HDMI ports and cables are pretty sensitive, so any interference could be problematic.

While this isn’t really problematic at a power source, it can be on an HDMI cable. These are sensitive and so any change, even one provided by the device protecting, can have an effect on the picture being displayed. The effect could potentially be minimal, or it could render your TV unwatchable.

Another thing to consider when it comes to power surges is that your connection ports are likely not the problem. If you were to experience a power surge in your home theater system, it’s likely the electronics in the HDMI board that have been fried, not the port itself.

Either way, the short answer is that surge protection can be a useful addition to your home theater, but this shouldn’t necessarily be surge protection at your HDMI ports. Power surges should be addressed at a much broader level than an HDMI port because there are other components in your system that’ll probably also be affected by a power surge.

What are power surges?

You might think it’s obvious what power surges are and what causes them, but it’s worth knowing about this in relation to your home theater equipment. Understanding specifically about power surges and their effect on your system allows you to make better plans for protecting against them.

Power surges are also known as electro-static discharge, which is the same as you getting a small shock from touching a metal device. Essentially the same thing is happening to your electronic equipment, but on a different scale. Electronic devices are obviously greatly affected by these events.

The video below offers an easy explanation.


What is a Power Surge?
Watch this video on YouTube.
Probably the best-known example of an event that causes a power surge is lightning. When lightning strikes near a power cable, it can boost the energy traveling along the cable by millions of volts. However, this is realistically the least common example of power surges.

More common causes are things like faulty wiring, old equipment, issues with transformers, and other problems in the system that cause fluctuations in the power supply. If you’ve been hit by a power surge in your home then these are the most likely causes for it.

So, when it comes to adding surge protection to your system, it isn’t always necessary. If you live in an area with clean power then you shouldn’t have a problem. But if you notice things like flickering lights and power failure, it’ll definitely be worth installing some surge protection if you haven’t already.

What is surge protection?

Protecting your electronics from power surges is a pretty sensible thing to do in most situations, and it really doesn’t need to be expensive. HDMI surge protectors are surprisingly expensive, whereas you can find surge protection devices for significantly less money elsewhere.

But what is surge protection? In short, the device will contain a circuit that diverts extra current to the devices earth wire, therefore removing it from the circuit. It does this using a component called a metal oxide varistor, and this is a pretty clever little thing.

Doing it this way allows the current to continue as normal while the excess is diverted back to the ground wire. Another way of looking at it is that the MOV is a pressure sensitive valve. When the pressure is too high, it opens to reduce the pressure to its normal levels.

While this is the basic system for any surge protector, their quality varies massively. HDMI surge protectors work in the same way, but divert the excess current back into the system.

For most people, inexpensive plug surge protectors will be enough. However, if you’ve got an expensive setup, or a particular problem with your system, then you might want to invest in a higher quality piece of equipment. Either way, I still wouldn’t bother with an HDMI surge protector.

What to look for in your surge protector

As with any other electrical device, you have varying levels of quality when it comes to surge protectors. The same is true for HDMI surge protectors, although their price and effectiveness doesn’t vary as massively.

These are the main types of surge protector you’ll find:

When looking at surge protectors, look out for these main features:

Surge protection isn’t an immediate thing, as it has to have a surge to react to. The longer the response time, the longer your electronics will be exposed to a spike in voltage. More expensive models will usually have a much better response time. A response time of less than a nanosecond is ideal.

This is the voltage at which the MOV will begin transferring current back to the ground wire. The lower the clamping voltage, the better the level of protection. You’ll find clamping voltages of 500V, 400V, and 330V, but I wouldn’t bother going above 400V.

This refers to how much energy the surge protector can absorb before it breaks, and is measured in joules. The higher the number, the better the protection. Don’t look at anything below 200 joules, and anything above 600 joules is considered high-end.

HDMI surge protectors might seem like a great idea, particularly with more advanced technology. However, the HDMI port isn’t the best place to put surge protection because of the way it works, and the sensitivity of the connection.

I think it makes more sense to put surge protection at the power source, as this way it can protect all of your devices. Considering you can get surge protector plugs for next-to-nothing, this seems like a no-brainer.