Getting the right balance between stereo sound quality and a good speaker system for films is a challenge, but I found a home theater bypass to be the best way of solving this.

So, what is a home theater bypass? A home theater bypass is a feature on integrated amps that allows you to get great audio quality from music using your normal speakers. It does this by bypassing the gain controls, so your preamp can be used simply as a stereo amplifier. 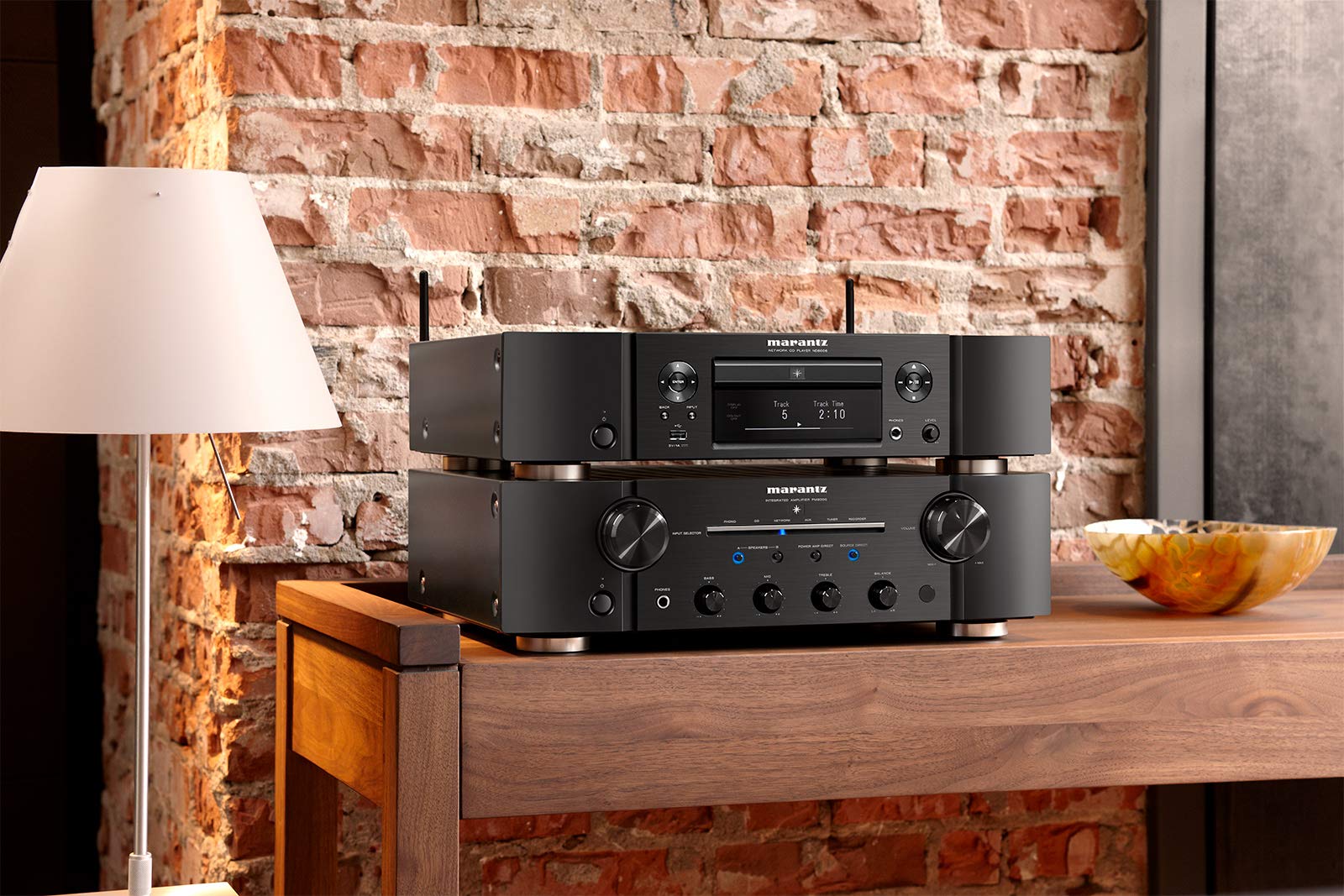 This means you don’t have to worry about volume or sound quality issues.

While this might sound simple enough, I found that the issue is more in-depth that simply buying an integrated amp with a switch. This article looks in more detail at how a home theater bypass works, and why this is useful for audiophiles such as myself.

How Does A Home Theater Bypass Work?

The main challenge I found when integrating my music devices into my home theater system was how to use the same speakers. My home theater setup is surround sound, whereas my CD player outputs in stereo. This is generally the case for all music, whether you’re streaming or listening to a physical disc.

A home theater bypass allows you to connect your stereo to your speaker system, and the music is then put out through the two main speakers. Providing you have an integrated amp with a home theater bypass system, setting everything up will be quite easy.

The main benefit of using the home theater bypass switch is that it allows you to override your amp’s digital processing systems. This means the amp will not affect the audio’s volume, eq, or gain, which it does with audio tracks for films, particularly if you’re using surround sound.

As I mentioned above, the bypass feature doesn’t affect the audio’s volume. I found this is one of the biggest bonuses because it means you won’t have to constantly be playing with the volume control when switching between inputs. The volume control then falls to your stereo, which is how it should be when listening to music.

Something worth noting is that the bypass feature doesn’t convert stereo audio into surround sound. If you’re connecting your CD or record player to a surround sound system, the bypass will only use the main left and right speakers, and in most cases your subwoofer. Music is recorded in stereo and can only be played back in stereo.

The actual science behind how the home theater bypass feature works isn’t that complicated, but the main thing to note is that not all amps come with this feature. It tends to only be present on higher-end integrated amplifiers, but if you’re serious about listening to music as part of your home theater setup then it’s something of a no-brainer.

When Would You Want To Use Home Theater Bypass?

As I mentioned above, this is a very useful feature if you plan on using the same speaker system for both music and video. There’s nothing stopping you from simply connecting your music device to your speaker system without the bypass, but this leads to a number of problems.

This leads to problems when it comes to introducing stereo audio into a surround sound system. It’s likely that you’ve set up you’re A/V receiver and amp setting to be optimized for surround sound, and these settings will likely not be right for stereo. For example, the bass might be perfect on surround sound, but far too high for stereo.

Without the bypass feature, you would have to revert your system to default every time you switch devices. Unless you have a receiver that allows you to save different eq settings, this will become very boring after the first or second (or tenth) time.

The bypass setting lets you switch between stereo and surround sound without changing any settings. It ignores the integrated amp’s digital sound processing, meaning your music will come out sounding exactly as it should. Granted, it might mean more money when it comes to buying an amp with the right feature, but it will save plenty of time along the line.

How Will You Know If Your Home Theater System Has A Bypass Feature?

Unless you have money to burn, it might be worth checking whether your current home theater system already has the bypass feature. I was lucky in that I’d accidentally bought an amp with the right capabilities, and this saved me having to go out and buy a new one.

Bypass is generally only found on higher-end integrated amps like the Marantz PM8006 (see it on Amazon). So if you bought an expensive one from the start, your chances of having the bypass feature are much higher. If not, check your system first before you rush out to buy a new one.

Checking for it is simple enough. The best place to start would be in your amp’s manual, because if it has a bypass feature it’ll likely tell you how to use it. However, if the manual isn’t lying around, you can also check the back of your device. It’ll generally be two RCA inputs that are labeled “home theater bypass” or “direct input.” If your amp has a section with either of these headings, then you’re in luck. 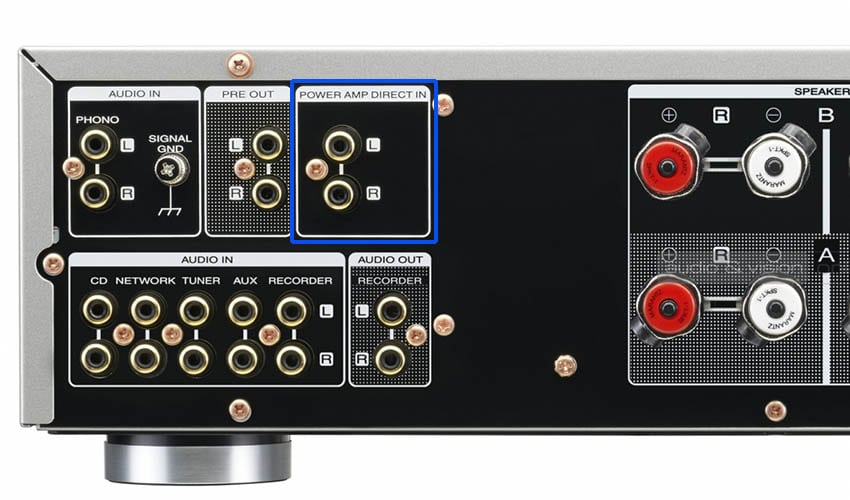 If you can’t see any evidence of a bypass feature, a quick search online should help to answer your question. If you don’t have the feature at all, make sure you research integrated amps thoroughly before buying one to make sure it has the feature.

How Do You Use Home Theater Bypass?

As technical as the system can be made to sound, setting it up is actually really quite simple. Again, if you have the manual handy, check that before going any further because it probably has more detailed instructions than the ones I’ll offer here.

The most important thing to check before continuing is that your input device (CD player, record player, laptop, etc.) has its own volume control. The home theater bypass will cause the audio to be played at full volume, and because it overrides the amp’s volume settings, you’ll have no other way of turning it down.

This is fine for most devices, but you might encounter a problem with record players. If you are looking to connect a record player and it doesn’t have its own volume control, you’ll need to also buy a preamp to give you this feature.

So to connect the bypass feature, all you need to do is take the RCA channels from your stereo and plug them into the bypass ports on your amp. Obviously make sure left and right are connected to the corresponding ports, but other than that it’s pretty straightforward.

When listening to music on your stereo, any audio mixing will need to be done there. However, when you switch the amp back over to other settings, such as for video or a games console, the system will switch back to its normal surround sound features.

Is There Another Option To Use Instead Of Bypass?

I found that using the bypass setting on an integrated amp is definitely the easiest way to overcome audio problems arising from stereo and surround sound. Realistically, there aren’t really any other options using your existing equipment, other than manually switching between input devices and manually adjusting the settings each time.

The only other option you really have is to replace your current system with another than does all of this automatically. However, replacing your system obviously won’t be cheap, and it’s not really worth it for the sake of not wanting a bypass feature.

However, you can also buy splitter switches that will allow you to alternate between outputs from your amps. These switches are inexpensive, but just add another level to your system, and you might notice a drop in sound quality by integrating an inexpensive piece of equipment into your fancy setup.

While looking into this topic, I came to the conclusion that a home theater bypass is definitely the easiest way to overcome the issue of stereo and surround sound. Considering higher-end amps come with this feature as standard, it’s so easy to just plug your CD player into your amp, and then switch between the two whenever needed.

As I mentioned, this also means you don’t have to mess with the audio settings to get the right balance. For me this was a massive help, because even though I know how to change the settings, finding the right balance every time was something of a chore. For this reason, the bypass feature is definitely the way forwards.