When I came to set up my home theater system, I was familiar with the standard devices, such as speakers and subwoofers, but I’d seen the term receiver thrown around without really knowing what it actually does.

So what does a receiver do for a home theater?

In essence, a receiver is the central hub of your home theater system, and probably the most important part. It connects your input device (DVD or Blu-ray player, games console, etc.) to your output device (TV or speakers). It also allows you to switch between devices, and can amplify signals for more intricate systems. 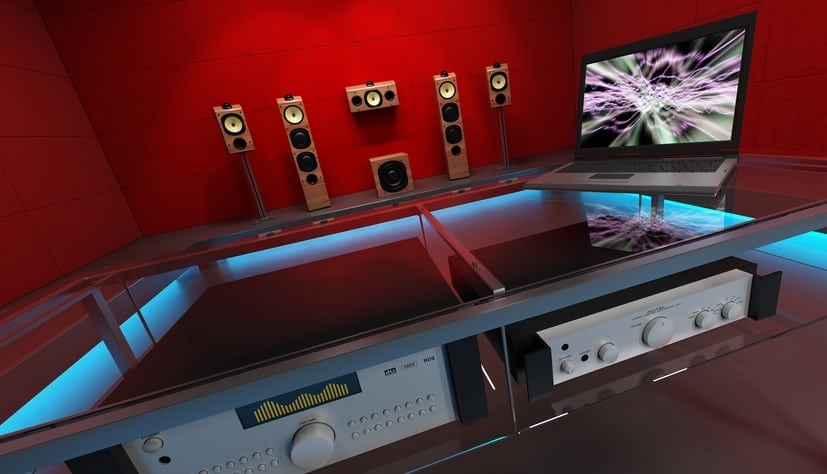 As you can see, the receiver is probably the most important piece of equipment in your entire home theater system. Until now, I’d thought I was fine without one, and while it is possible to connect your input devices directly to your output devices, a receiver makes everything easier.

This article looks at the purpose of a receiver, and the type of home theater systems that can benefit from one.

Also, check out my most recommended home theater receivers.

What Kind Of Home Theater Systems Benefit From A Receiver?

Receivers are particularly useful if you have multiple devices in your home theater system. These can include DVD players, CD players, games consoles, and many more, and the more devices you have, the more irritating it is to switch between them.

A receiver will often have multiple inputs, often including HDMI and dedicated audio inputs. This makes it much easier to switch between DVD player and games consoles, and means you can always enjoy the same level of sound quality from your home theater system.

Receivers are particularly useful if you have surround sound in your home theater system, because it can decode surround sound formats, and amplify the signal for bigger systems. This means you can hook up more speakers without losing any volume or sound quality.

If you have multiple devices connected to your home theater system, then your receiver will also act as your control hub. Modern receivers will often feature their own user interface, which allows you to switch between devices and have much greater control over your audio and visual settings. They will also usually have their own volume settings, which gives you a master volume to control, while also still having volume control on your speaker system.

I found that even though I began building a lower-end home theater system, a receiver was still very useful. The main benefit for me was that it gave control over all the devices connected to it, which saved me having to manually switch between input and output sources, something that can become very irritating if you have several.

So essentially any home theater system will benefit from a receiver because it gives you a much greater level of control over your system. Some people believe they get better picture and sound quality not using a receiver, but with recent advances in HD technology, there’s very little to be lost by fitting one.

Do I Need An Amplifier Or A Receiver?

After digging a little deeper into what a receiver does, I found people asking whether they also needed an amplifier for their home theater system, or whether a receiver is good enough. I felt this to be an important question, particularly if you’re building a higher-end system with surround sound and expensive audio equipment.

Essentially, a receiver already amplifies signals, but to a lesser extent than a dedicated amplifier. An amplifier is referred to as a “separate,” which means that if you get one, you’ll also have to buy several other devices to fill the role of a receiver. A receiver does several jobs well, but not as well as dedicated devices.

Understanding the difference - AV Receivers and Amplifiers
Watch this video on YouTube.

The main benefit of a receiver is that it’s convenient and easy to use. It allows you to plug in multiple devices and control sound, among various other settings. A standard A/V receiver will be absolutely fine with less technical setups, and will provide enough amplification for most speaker systems, particularly in smaller rooms.

Many modern receivers are also compatible with the latest technology, including 4K and Dolby True Audio. This means that they’re quite future proof, and should have you covered for several years. If you’re less technologically adept, or have a system that doesn’t make too many demands, then a receiver will be absolutely fine for your needs.

An amplifier is only really useful if you’re looking to build an expensive and high quality home theater system. If you’re spending lots of money on a high-end speaker system, then you’ll want to do everything possible to get the most out of your speakers. In this situation, switching to separate components will allow you to get your money’s worth.

The other big consideration is price. I was limited on funds for my current system, and so a receiver seemed like the obvious choice. It does several jobs in one, and meant I could buy a more expensive receiver and save money compared to buying the components separately. However, if you’re a true audiophile then it’s likely money isn’t your main concern with the project, and so separates would be a good choice.

How Do I Choose A Receiver?

There are hundreds (if not thousands) of different receivers on the market, and if it’s new territory for you, everything can become a bit overwhelming. While I was looking to choose my own receiver, I came up with a list of requirements that helped me pick the right device. Consider the following when choosing your receiver:

This might seem like a lot of things to consider, but it’s worth making the right choice when buying a receiver. If you’re unsure on some of these accounts, do a bit of research to find out what you need, and which devices you currently own. The receiver is the most important part of your home theater setup, so it’s worth getting it right.

Can I connect any speakers to a receiver?

All speakers should use the same input method, unless you buy a certain brand that might only allow its speakers to connect to its own receivers. However, this is quite rare, and for the most part all speakers will connect to a receiver. If you’re unsure, and already own speakers, double check the receiver you’re looking to buy. Most will have a specification list somewhere.

Will my receiver power my speakers?

A receiver of a certain power level can power speakers on its own, but it should always provide 10% more power than the speakers need. However, if you’ve got a high-end speaker system, including surround sound, then your speakers will need their own dedicated power source.

Do you need a receiver for surround sound?

Yes, a receiver allows you to connect multiple channels to the same device, and it decodes surround sound audio files for the best sound quality.

As I found, receivers are the most important part of your home theater setup, and function as the heart of the system. They make connecting multiple devices convenient, and allow for surround sound and other more complicated technology. While it is possible to have a system without a receiver, they make everything much quicker and easier.