Whether you are new to the world of audio or have been here for a while and are wanting to change things up, you might be curious about dabbling your music in stereo versus surround sound. Is there a difference, and if so, which one is better for listening to music in?

Music is recorded in mono and mastered in stereo. That is why you should listen to music in stereo to achieve the best quality sound. While you can attempt to stream music in surround sound, this will often just make the audio louder without improving clarity, and often results in sound distortion.

Also read: How is Surround Sound Different Than Stereo?

While some people will try to use various music software programs to send audio signals throughout their multi speaker setup, the best option for this is to still listen to music in stereo, perhaps using a multi channel stereo option rather than opting for surround sound (or fake surround sound).

Either way, while surround sound can be great for movies and gaming, music is best streamed on stereo. Let’s take a closer look.

What is the Difference between Stereo and Surround Sound?

Before we can more concretely understand why you should listen to music in stereo instead of surround sound, it is important to first recognize and know the difference between stereo and surround sound in the first place.

With this knowledge, it can be a bit easier to recognize why music should be listened to in stereo. So, what is the difference between stereo and surround sound?

In short, stereo is made up of two audio channels, most typically a left and a right audio channel. Audio, like music, is mastered in stereo and best played over this two-channel sound system setup. Surround sound is compiled of three or more audio channels, including (at minimum) a left, right, and center audio channel.

Of course, as you continue to add to your surround sound system, you can add additional channels so long as they are supported by the receiver and incorporated well into the system as a whole. This can include multiple audio channels for the front, sides, and rear as well as the addition of a subwoofer.

Through the use of multiple audio channels, each surround sound speaker is able to receive and transmit various precise audio frequencies that have been designated to be emitted by the speaker component designed to handle these the best.

For example, a tweeter will emit higher audio frequencies as it was designed to do while a subwoofer will receive and emit low-frequency audio signals.

Each speaker, in this case, uses its various physical components to not only receive the signal (transmission) but to provide the appropriate movement that consequently results in the sound heard by listeners.

In this way, a left and a right speaker might contain different information such as the vocals versus the instrumentals, while a surround sound system’s speakers would receive much more specifically broken down information refined to the audio frequencies achieved on the recording.

Because of this main difference, not only would a stereo sound system require many fewer speaker components than a surround sound system, but it serves a very different purpose for high-quality audio.

Specifically, a stereo system would not make for the highest quality audio for streaming a movie, but it is the optimal setup for listening to music.

Why Should You Listen to Music in Stereo instead of Surround Sound? 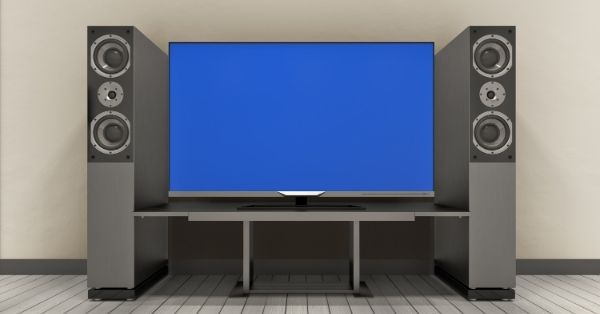 So, now that you understand the basic difference between stereo and surround sound (the number of audio channels in each system), we can take a closer look at why music should be listened to primarily in stereo instead of surround sound.

Now, this is not to say that you cannot play music in surround sound- it just was not designed to be played this way, and ultimately will be a hit or a miss depending on your system.

With that said, listening to music in stereo is optimal since this is how it was mastered in the studio. One audio signal typically transports the vocals while the other transports the musical tracks. If you use surround sound to play music, you run the risk of distorting the sound quality and achieving poor results.

To put it simply, music was not designed to be played in surround sound, so even if you desire to be immersed in your music, playing it in surround sound is not how you will be able to achieve these results.

Consider the best quality pair of headphones that you have ever listened to. With your headphones, you are listening in stereo to the left and right audio channels that, when combined, create a seamless audio experience from your favorite music.

Instead of attempting to send audio signals in all different directions, the music (that was mastered in stereo) can be played as it was designed to be.

Now, there are people who will use a wide range of systems to attempt to convert stereo music into an appropriate setup for surround sound.

Ultimately, this system proves ineffective most of the time. Still, there are some people who prefer the way that this “fake” surround sound sounds, and because of this, they might argue that this setup can work.

Personally, I am not here to argue with these people, because if it sounds good to them, then so be it. Still, that does not mean that using a surround sound system is inherently best (because it is not), and using a stereo sound system is optimal (by nature of its design) when listening to music.

What is the Difference between Multi Channel Stereo and Surround Sound?

Now, if you are using a high-quality sound system and you want to be able to hear music out of multiple speaker components, then you might be wondering how you can mix the music to make this possible.

After all, you have invested countless hours of research, time, and money into setting up your sound system with multiple speakers. Can you use a multi channel stereo setup to make this work, and how does this differ from surround sound?

Essentially, a multi channel stereo setting on a receiver pushes out the stereo (left and right) audio tracks to multiple speaker components.

The two audio signals composed in the stereo will be “copied” and “pasted” onto additional left and right speakers. Surround sound attempts to break up these signals, based on frequency ranges, to be sent to multiple speakers.

So, when you begin playing music over a multi channel stereo system, you might feel like you are experiencing surround sound because the music is coming from many speakers instead of just your front left and front right. However, this is not because the audio is being divided up. Instead, it is being replicated on the same side of the room.

With surround sound, the front speakers have very different purposes and respective audio signals that they receive compared to the side and rear speakers. This helps with decreased localization and increased perception of being fully immersed in the sound.

This is why using surround sound is such a great setup for your movies and gaming. While the audio from the dialogue might be sent to the front speakers, the booming bass and background noise is sent to alternative speakers.

However, when listening to music, the music is not recorded and mastered in a way that would be as fitting for a surround sound setup. Instead, the stereo music is split into a left and right audio channel only, so it is best perceived by the listener when connected in this way.

So, sure, you can attempt to make your own setup work in whatever way you desire. However, by following the general principles of how sound is recorded, mastered, and processed by sound equipment, you can achieve the best results for your audio by keeping music to stereo and music and gaming to surround sound.