Projectors are always mounted horizontally, with the lens point forward to the screen and the legs or bottom side facing downward.

When you’re short on space, however, you’ll be tempted to try other options, including mounting the projector vertically on its sides. Is this a good idea?

Most modern projectors can be mounted vertically but the same is not recommended as the machine could overheat while working. Vertical mounting of a projector can interfere with the manufacturer’s original heat conduction design and can lead to faster burnout of parts. The rest of the article will take a closer look at all you need to know about mounting your projector vertically. Also read, Can I Use a Projector Outside During the Day?

Why Mount Your Projector Vertically?

There are a few scenarios where it would make sense to mount a projector vertically:

All of the above situations make for a perfect excuse to mount your projector vertically, but should you do it?

Mounting Your Projector Vertically: What You Need to Know

As you’ve seen above, you can mount your projector vertically, but before you pull out the cables and get started, you should keep the following in mind:

Manufacturers Advise Against It

Most people agree that their projector manufacturers warned against mounting projectors vertically. If you look in your manual, you’d most likely find the same warning, with information on the proper way to mount the projector.

This warning hasn’t deterred many people from going ahead to mount the projector vertically. While some people only do this on specific occasions, other people leave their projector on its sides near permanently—all to varying results.

Since manufacturers don’t support vertical mounting, you’ll most likely be unable to claim a warranty if your projector is damaged as a result of this approach.

You May Distort Lamp and Airflow Orientation

Manufacturers don’t explicitly state why you shouldn’t mount your projector on the sides, but it’s easy to deduce that such positioning can distort lamp and airflow orientation. When your projector lamp is working in a position it wasn’t optimized for; it can burn out faster.

Similarly, a slight change in the original airflow orientation can damage important parts in the projector and reduce the lifespan. This is especially true if the projector has any vents on the side you’ve chosen.

How to Safely Mount the Projector Vertically

If you absolutely have to mount your projector vertically, here’s what you should do:

Most modern projectors can handle a few hours of hard use (as is the case with vertical projection). Therefore, you can mount your projector vertically when there’s a short term need for it, reverting to the normal, recommended mounting method as soon as possible.

Put the Lens End on Top

Heat rises from the bottom upwards. Having the lens side of the projector near the bottom in a vertical mount exposes all the internal architecture to a bit more heat.

When you put the lens on top, you make it easier for the heat to dissipate quickly into the room, reducing the heat exposure to the projector’s components.

If you can mount your projector vertically without blocking the vents, you’ll reduce the risk of overheating. Some projectors have vents on both sides, while others only have vents behind or at the rear of the top side.

If yours doesn’t have vents on both sides, you can mount it vertically with less concern about the heat. However, with vents on the side, you need to find a way to maintain the airflow if you insist on vertical mounting.

Get a Fan for the Projector

As you’ve seen thus far, the bulk of the reservations around mounting the projector vertically hinges on maintaining airflow.

What better way to do this than by positioning some small fans near the projector to keep it as cool as possible whenever it’s working?

Brands like Vornado Flippi V6 and Honeywell HTF090B (Amazon links) are small and affordable fans you can position next to the projector to keep it cool. However, this approach might not work if you’re considering mounting the projector vertically due to space constraints.

Alternatives to Mounting the Projector Vertically

Have you reconsidered your decision to mount the projector vertically, and now looking for alternatives? The options available to you will come down to the reasons for the decision in the first place.

If you’ve been unable to find space for your projector screen and considering vertical mounting to be able to project to the ceiling, keeping the projector horizontal and bouncing the image off a front-facing mirror, like the Cassini 160mm Telescope Spherical Mirror (Amazon), is a good idea.

Your standard household mirror won’t work because they come with reflective coatings on the back. With both the front and the back of the mirror reflective on a house mirror, the resulting picture will not be clear enough. With an optical mirror, however, you can get a clearer image.

For scenarios where you can’t find space for the projector itself, you should consider getting a wall or ceiling mount if any of them are practical in the space.

For ceiling mounts, you can choose options like the VIVO Universal Adjustable Projector and VANKYO Universal Extending Projector mounts (Amazon links). For your wall, the DSRN Mini and Elitech Universal wall mounts are good options.

Ways to Maintain Your Wall or Ceiling Mounted Projector 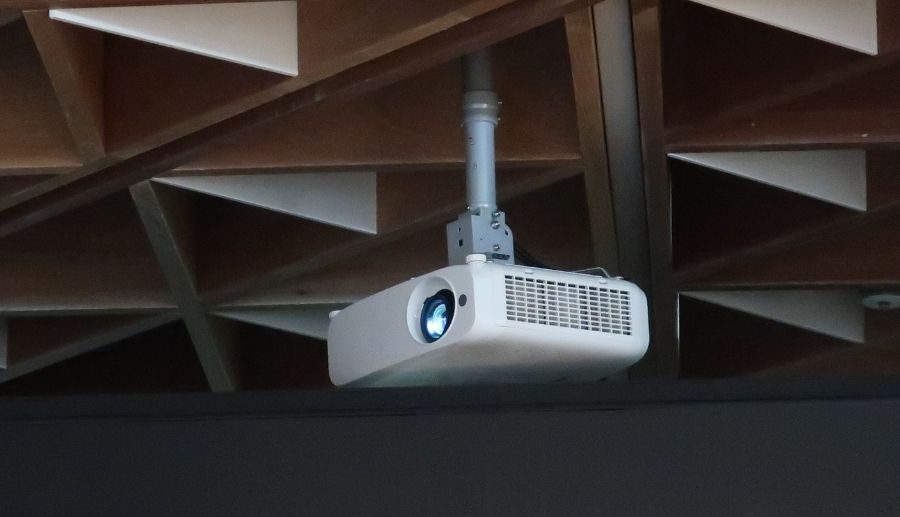 Also, read my guide on How to Connect Wireless Speakers to a Projector

Most manufacturers don’t encourage mounting projectors vertically and for good reasons. However, if you have legitimate reasons for thinking about the vertical projection that can’t be remedied with alternatives or purchasing extra hardware, you can give it a go.

You just have to ensure you don’t block the vents and also make sure the projector is kept cool with external fans where possible.