Suppose you are a music producer, audiophile, or someone who is serious about monitoring music. In that case, you should not just be particular about the kind of audio equipment you use but also how you use them – to be specific, how you position them.

When the speakers aren’t placed the way they should be, your audio listening and monitoring experience take a discernible hit, particularly when speakers are placed horizontally.

Placing speakers horizontally is physically possible but is considered an acoustic blunder. The innards of studio monitors are not designed for horizontal positioning. Their bass drivers and tweeters are aligned vertically. When placed flat, the stereo imaging gets affected, besides other things. 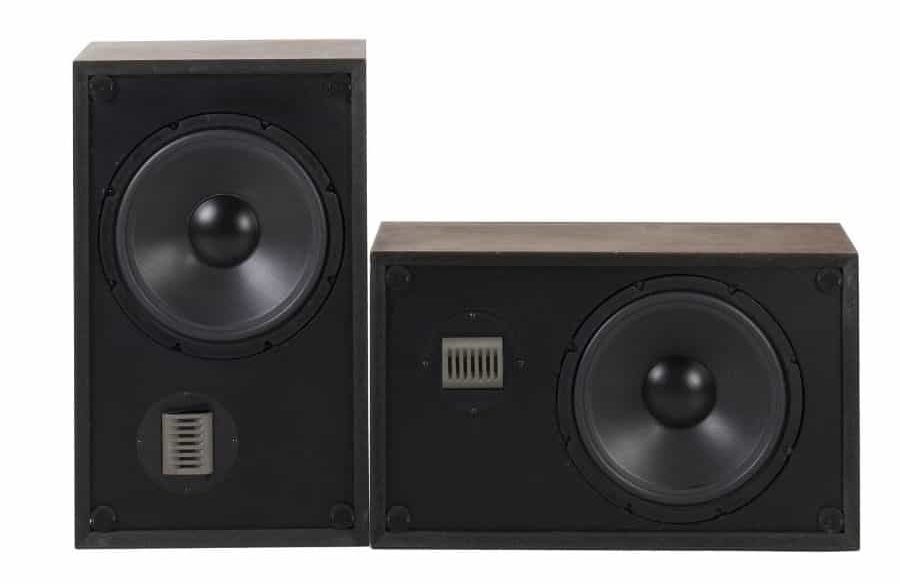 Keep reading to learn a bit more in detail the issues your bookshelf speakers would encounter if they are placed horizontally.

Why Is Horizontal Placement of Speakers Not Ideal?

Here are the reasons why horizontally placing a set of speakers is a bad idea:

Stereo imaging is the major reason why placing monitor speakers horizontally doesn’t work. The bass driver and tweeter in the speaker are vertically aligned as standard so that the audio from each comes through to you simultaneously. When the speaker is tilted to its side, the sounds cease to come through as they should.

This invariably results in an unstable, strange, and disjointed stereo sound profile. In other words, the various frequency elements of a particular audio source sound as if they are coming from a different source. Moreover, each driver’s varying path lengths and the phase cancellation lead to the comb-filtering effect.

In layman terms, the sound becomes inaccurate and colored.

Not to mention, the speakers’ reliability and accuracy as a monitoring tool decline too. Moreover, the coloration dramatically varies as you move right and left from the central position of listening.

Most bookshelf speakers also have a fairly narrow vertical dispersion to minimize the reflection issues off a work surface and ceiling or console. This dispersion is invariably managed by a waveguide that is built around the speaker’s tweeter, in the baffle.

When you turn the speaker sideways, you reverse the speaker’s dispersion traits, resulting in a stereo image and ‘sweet spot’ that’s too narrow.

Another aspect to look into is the bass driver, which is usually mounted away from the cabinet’s bottom. If the speaker is placed sideways, the bass driver would invariably end up much closer to the mounting area. Based on how the speaker gets its support, this positioning could result in frequency response modifications through the bass area.

Cooling is another likely problem to occur when bookshelf speakers are placed horizontally. Most powered monitors come with rear-positioned finned cooling heatsinks, which work like a chimney. They push cold air upward via the vertical fins.

When you turn the speakers onto their sides, the cool flow of air gets disrupted and turbulent. This significantly reduces the speaker’s cooling efficiency, causing thermal issues as a result. And when these speakers overheat, they shut down automatically to prevent premature component failure or any further damage.

A bookshelf speaker typically comes with a set of attributes, referred to as “directivity.” It is plotted by taking into consideration frequency response graphs off and on an acoustic axis.

The plotting is generally 90 degrees on either side, presented on a graph. The heat map essentially presents audio in the visual format.

If you’d like to learn more about audio visualization, check this video out:

Bad positioning of speakers not just means horizontal placement, but also speakers placed too high or low from your ears. Studio monitors produce sound directionally. And in the case of tweeters, high frequencies travel even more directionally than lower frequencies.

The next big speaker placement gaffe is having the speakers positioned a bit too low or around chest level. Studio monitors placed too low would make it difficult for you to hear the high frequencies, resulting in inaccurate audio mixes.

If you’d like to test how the speakers’ height affects the accuracy of audio, carry out this small listening experiment:

If you’d like to buy some pads for your audio setup, consider the Studio Monitor Isolation Pads by Sound Addicted (Amazon link). Using pads or some form of separation from the desk or platform also would help improve the sound of the speakers.

The issue with placing your monitors directly on your console or desk is the speaker’s kind of getting integrated with the platform and resonating with it.

This often results in muddiness and a less pronounced sound. Big studios usually have their monitors suspended in air, ensuring little to no speaker cabinet vibration. Not to mention, this helps the speakers reproduce sound a lot more accurately.

Are There Speakers That Can Be Laid Onto Their Sides?

Suppose a studio monitor is designed to be placed horizontally. In that case, it’s recommended you place them on their sides because not doing so could cause the same issues that horizontal placement of vertical speakers causes.

The majority of bookshelf speakers are designed to be placed vertically. You’ll seldom come across elongated studio monitors. But if you do get to see one, it won’t be that difficult to identify them as they’ll look the part. Horizontal speakers usually have the tweeters built off-center marginally from their woofers, to negate sound phase issues.

Vertical speakers should not be laid on their sides. There’s no debating that. But there are scenarios where you could or may have to tilt the speakers a bit, albeit not the full 90 degrees.

Some vertical monitor speakers could come with higher than normal acoustic axes. They may, therefore, would have to be inclined so that the tweeters could be lowered. Here are a couple of ways to do that:

When bookshelf speakers – which are meant to be positioned vertically–are laid on their sides, their stability, frequency response, cooling, coloration, etc. get affected. Simply put, the original soundstage of the speakers gets lost. Therefore, if you don’t have to or if it’s avoidable, refrain from vertically positioning your speakers.

If you’d like to make horizontally positioned bookshelf speakers sound right, listen to them lying on the floor. But even then, the internal components of the speaker would get damaged.