I found when I was looking for the best quality speaker systems that home studio monitors are much better quality, so I began to wonder whether they would be suitable for a home theater.

So can you use studio monitors for home theater?

As studio monitors are made for people who work with audio, they give much cleaner and better audio than normal speakers. So, providing aesthetics aren’t top of your list, they’re well worth the investment and can be used for home theater as well.

Related: Can Car Speakers Be Used For Home Theater? 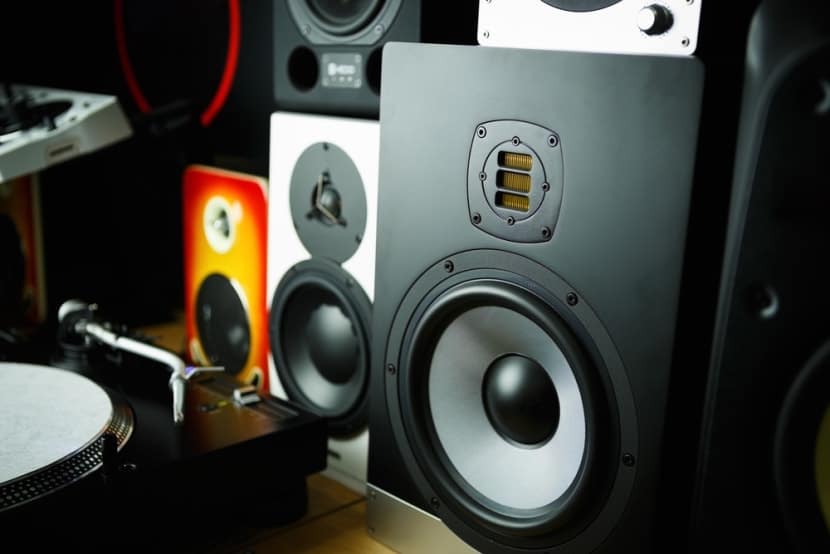 I decided to look into why home studio monitors are much better quality, and why they haven’t really taken off as a replacement for normal speakers. This article goes into a bit more detail about the difference between the two types.

How Do Studio Monitors Work?

The biggest difference between studio monitors and normal home speakers is that the former are active speakers. So what does this mean?

Active speakers require their own power source, whereas normal home speakers are passive. This means they get their power from the device they’re plugged into.

Another big difference is that studio monitors use different amplifiers for each frequency of tone. What this means is that each component in a studio monitor (the subwoofer, the tweeter, and the speaker) all have their own amplifier, and sounds therefore come out much more “accurately.”

Producing crisp and clear sound is obviously very important if you work in audio production, as you need to know what the audio sounds like at the very best quality. Normal home speakers don’t need this advanced level of technology because they’re usually able to deliver an adequate sound.

Unlike studio monitors, normal speakers only use one amplifier for all frequency tones. This means you don’t get the same crisp sound or range that you can get with studio monitors, but for many people, this level of sound quality is absolutely fine, and is probably already better than what they’re used to.

Home studio monitors are specifically designed so that sound engineers can pick out background noise from an audio track. What this translates to is incredibly clear audio quality that will easily show up any kind of distortion, white noise, or unwanted sound.

All of this might sound very appealing, but is it something you really need for your home theater system?

When might you want studio monitors in your home theater?

When I put my home theater system together, I realized that overall I favored music listening devices to video output devices. Granted, I still watch films and play games, but my CD player, vinyl player, and music streaming devices outweigh any video equipment I have hooked up.

This is the kind of situation in which studio monitors would be a great benefit in a home theater system. True audiophiles will be able to tell the difference, and will also want the best from their music. In this case, studio monitors are the way forwards.

One argument that’s often floated around about studio monitors is that they’re nowhere near as aesthetically pleasing as normal home speakers. However, the models I researched were all very nice looking, the only real difference being that they were chunkier than home speakers.

Due to modern advances in speaker technology, home speakers are now very sleek while claiming to offer the same level of audio quality.

I’ve found that while this is true, studio monitors have the raw power and amazing craftsmanship that results in truly amazing sound quality.

If you’re looking for the best from your home theater setup, and you like to listen to music, then studio monitors are the way forwards.

Powered and passive speakers - basics
Watch this video on YouTube.

As I mentioned above, the biggest difference (and the one that many others stem from) between studio monitors and home speakers is that monitors are active. This means they have their own power source, and with this comes a whole range of benefits.

To make the information easier to digest, here are the main advantages and disadvantages of both kinds.

Overall, active systems allow for much better audio quality, and give your system a more streamlined and appealing look. Sure, some people might argue that the speakers themselves are too big, but I’d much rather have chunky speakers than endless cables streaming about the room.

That said, until I researched this topic in detail, I was perfectly happy with my passive speaker system. After all, I wasn’t aware there was the possibility of a significant upgrade. If you favor video over audio, and enjoy building your own system from scratch, then a passive system is still absolutely fine.

Do you need additional equipment to use studio monitors?

The main purpose of home studio monitors is to produce clear and crisp sound, which is very close to the original studio recording of the audio track. This means that as an end user, you won’t have to worry about other equipment, such as equalizers. There’s little you’ll be able to do to get better sound quality from studio monitors.

This also means that studio monitors are great at audio output from a range of different sources. This is because they’re designed to hit a greater range of notes, and provide the listener with a wide array of tones. Normal speakers won’t have as much range, and so sounds might be tinny or muted in some cases.

Can you hook up studio monitors to a TV?

In some instances, you can simply connect your studio monitors to the TV using the headphone jack. You need a cable with two positive ends, but it’s really as simple as that. However, for the best sound quality, you’ll want a monitor controller, which will not only make the connection easier, it’ll give you the sound quality and adaptability you want from the studio monitors. Connecting studio monitors to a TV is actually surprisingly easy.

Are active speakers better than passive?

In short, yes, although it depends on your needs. Active speakers provide crisper sound, and don’t lose quality at higher volume. Passive speakers, however, are excellent for home theater systems if you want some nice looking speakers.

Home studio monitors are an excellent addition to a home theater setup, and I found they give the truest and clearest audio quality you could want. For someone who uses their system to listen to music, this is a great advantage, as is the ease of use. Unlike normal home speakers, they don’t need the same kind of setup, and will save you plenty of time.