An essential part of a home recording studio is your monitors. When you record and then mix, most of the decisions you make are based on what you hear from the monitors. So, you want to know what kind of speakers you can use in your studio.

Also, read Can You Use Studio Monitors for Regular Speakers?

Studio monitors have several design features that make them more suitable for a recording studio. We will discuss some of them, including the difference between active and passive speakers, why many studio speakers have separate power amplifiers, and how nearfield affects speaker choice.

Why Shouldn’t You Use Hi-Fi Speakers As Studio Monitors?

Your goal when mixing music in your recording studio is to create a recording that sounds good. So why not use hi-fi speakers? They are designed to make music sound good, after all. So what could be wrong with using them in your studio?

The problem with using hi-fi speakers is that they are designed to make the music sound good for the listener. Because of their design limitations, hi-fi speakers manipulate the sound by boosting the bass and treble to create a sound that fools the listener into thinking it’s an accurate sound.

Of course, you want the music you record to sound better than good. To do that, you need to hear your mixes accurately, and studio monitors are designed for accuracy.

To understand the difference between monitors and speakers, think of a large concert. When you attend, the source of the music is the band, but the music you hear over the speakers is mixed by the engineers.

The engineers monitor the sounds and then mix them so that the music sounds great for all the concertgoers. Your studio monitors let you hear the music without the effects built into hi-fi speakers.

Also read: Can You Use Studio Monitors For Home Theater?

What Is the Difference Between Studio Monitors and Hi-Fi Speakers? 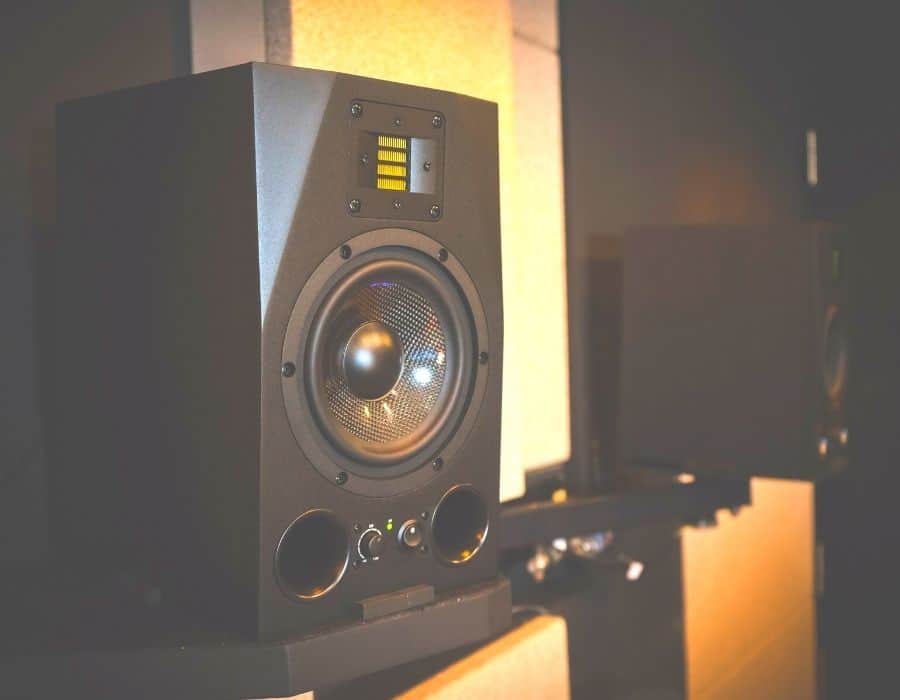 When it comes to appearance, monitors and speakers look similar enough that you can be forgiven thinking that they are essentially the same. The difference between them starts in the back. Studio monitors do not get their power from the amplifier as hi-fi speakers do. Instead, they need to be plugged in separately to power their internal amps.

When you hear someone say that studio monitors are active, that is what they are referring to. Their amplifiers are built-in, requiring the monitors to be powered separately. Hi-fi speakers receive their power from the stereo’s amplifier.

Most studio monitors have several built-in amplifiers. By powering the woofer separately, monitors can recreate sounds more precisely. That’s because woofers require more power to play the bass notes. On passive speakers with several cones, the bass takes energy from the other cones, thereby distorting the sound.

Having separate amplifiers also makes it easier to create crossovers. Crossovers refer to the circuits that send frequencies in an audio signal to the appropriate drivers. These are necessary because individual drivers in loudspeakers are not capable of playing the entire range of frequencies without creating distortion.

Why Not Use the Kind of Speakers People Listen With?

You might be wondering why use speakers that are far better than what most people will use. If the average listener will be listening through hi-fi speakers, computer speakers, or headphones, why does the recording need to be free of the kind of mistakes most people will not hear?

It is a legitimate question. However, it assumes that no one with high-end speakers will be listening to your mixes. What if you give it to a friend who knows a friend who has connections with a club? That influential friend of a friend will listen and hear the mistakes that your hi-fi speakers missed.

If you want your recordings to sound professional, you have to use the equipment professionals use.

Use a HI-Fi Speaker as a Reality Check

Most people will listen to what you mixed on imperfect speakers, cheap headphones, and the like. So having a hi-fi speaker and some earbuds in your studio is an excellent idea. Using them as part of the mixing process lets you know what the music will sound like outside your home studio.

Adding a speaker and earbuds to the process can help you in a few ways:

Think of the speakers and headphones as a way to test your mix so it will sound good no matter what it is played on.

Can I Use Studio Monitors As Stereo Speakers?

Ask the majority of engineers, and they will say you should use studio monitors for recording. Ask audiophiles if studio monitors should be used as speakers for a sound system, and you are wading into controversial waters.

The argument for using studio monitors goes something like this:

Rather than wading too deeply into these arguments, we will focus on nearfield. Studio monitors are designed to be listened to at specific distances. Nearfield monitors have a sweet spot—the place where your music will sound the way it is intended to. This sweet spot is typically no more than one to two yards (meters) away. Walk further away, and the sound begins to degrade.

So yes, you can use studio monitors in your stereo system. However, unless you also have midfield monitors, you will have to be within 6 feet of your system to hear the “authentic” sound of the recording. Also, are you willing to risk hearing an old favorite with mistakes your hi-fi speakers never picked up?

The majority of recording professionals will recommend that you use studio monitors. That is because hi-fi speakers manipulate sound to compensate for the design limitations of being passive speakers that rely on a single amplifier to play the entire range of frequencies.

Hi-fi speakers do have a role to play in a recording studio. Use them to test drive your mix. After you have done most of your mixing, listen to it through speakers as well as earbuds. Then continue to make adjustments until your recording sounds good, wherever it is played—commercial setting, headphones, or speaker.

Check out my recommended speaker setup for home theater.