If you are just looking for the right wall mount for your television, I know how frustrating it can be, trying to figure out if you have the right one or not?

Are the holes in the bracket going to line up properly for your device? Can you hang it yourself? Do TV mounts come with screws, and will the screws fit your television? Where do you even start? Having screws and the proper ones might be the most important piece of this process. 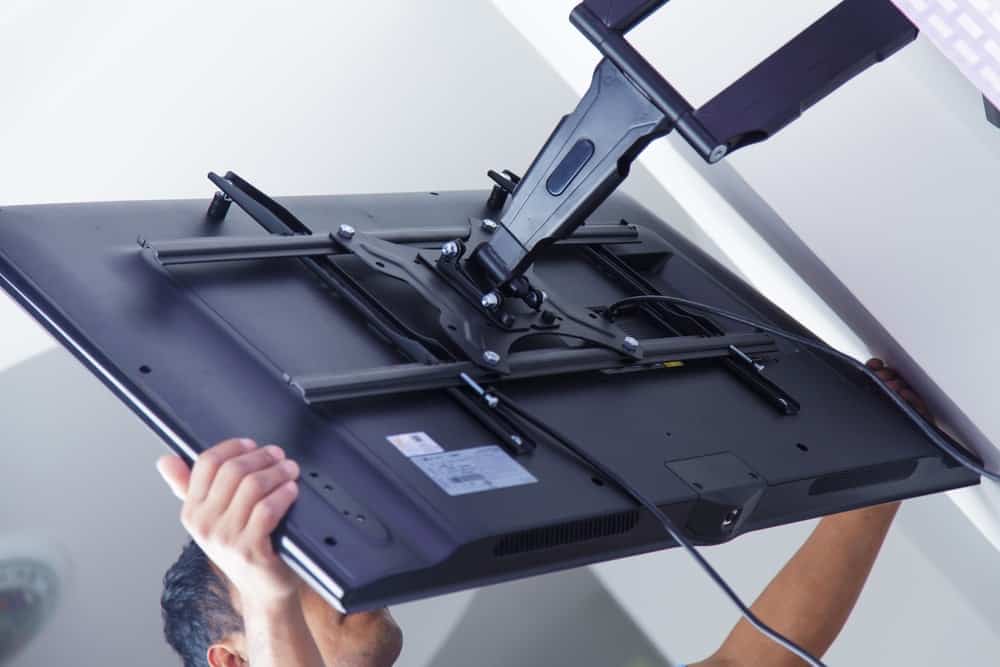 How difficult can mounting a TV really be?

It isn’t that difficult at all when you understand a bit of terminology, which I will cover in this article. I hear the terms M8 or VESA quite a bit when people are talking about TV mounts (and for good reason).

The unfortunate part is that people are mixing up the two and using them interchangeably. Even TV stores do this, which doesn’t help. Well, I am here to help you understand the difference so you can select the right TV mount for you. Now, if you’re ready, then let’s get to it!

I feel it is important to know this right off the bat, to end the confusion. TV mount screws that attach your television to the bracket are universal, if they are the same VESA size. I will cover what VESA means in detail below in the next section.

When flat screens first came out, not all of the manufacturers were using the same thread and screw diameters. This made it very difficult to figure out which TV mount you should purchase. Now, there is a standard that most TV manufacturers follow, which makes it so much easier to get your TV hung on the wall.

What Does VESA Compatible Mean?

First of all, what is VESA?

VESA is the acronym for “Video Electronics Standards Association”. Basically, this is a standard created to ensure that the measurements or locations of the threaded screw holes in the back of your LED TV (regardless of what manufacturer made it) will all be the same. That’s pretty much it!

Wall mounted TV’s are such a huge market now that something had to be done to ensure the process was as easy as possible for the consumer. My feeling is that manufacturers with a smaller share of the market were probably very quick to be a part of VESA. This helps them compete against the big players in TV manufacturing industry.

The way that manufacturers stay consistent with screw-hole locations keeps them in line with VESA. To find out which VESA standard your TV meets, locate the screw holes in the back of the TV and measure horizontally and vertically.

The measurement should be taken in metric. Yes, this is even the case in the United States, as this is a worldwide standard. Here are some of the more popular measurements/sizes.

And so on as the TV’s get larger and larger.

The imperial measurement is easy to calculate. 1 INCH = 25.4MM

As you can see, when the TV gets larger and the holes are further apart, the screws start to get larger as well. This only makes sense, as a larger television will need a larger diameter screw to take on the weight of the TV.

What is a VESA Screw?

I have seen questions online from people asking what a VESA screw is. In short, a VESA screw is a screw that is compliant to VESA for length and diameter. That’s it.

What does M8 Screw Mean?

Another great question I found, that deserves to be explained so you have a complete grasp of this concept, is what is an M8 or M10 ETC screw?

M8, for example, refers to the diameter of the bolt, which is 8MM (in metric). M10 would mean the screw/bolt is 10 millimeters and so on. Simple, isn’t it?

Read this for more information.

Let’s now answer some more questions on this topic regarding screws and TV mounts.

How Do I Know If My TV is VESA Compatible?

The way to find this out is to measure the distance of the four holes in the back of your television. Once you have that, you can go shopping for TV wall mounts. The packaging for the wall mounts will state whether they are VESA compliant or not.

When you locate a VESA compliant wall mount that supports a TV with the measurements you gathered, then you know your TV is VESA compatible. Did that make sense? Good.

What Size Screws Are Used for TV Mounts?

What you need to know is that each VESA compliant wall mount will have multiple sized screws to accommodate all of the different TV sizes that specific mount will support. This helps take the guess work almost right out of it!

As long as you know what distance your TVs holes are, you should be able to easily find the right mount.

Just know that wall mounts will hold various sizes of TV’s but don’t let that throw you off.

TV mounts can definitely ruin walls. It’s not surprising though, as these are big brackets being secured to the wall to hold upwards of 100lbs or more, depending on the size of the television.

Just make sure when installing that you span at least one (but preferably two) stud(s) to attach to. This will help prevent the bracket from digging in and causing damage to the wall.

Unfortunately, there will be some damage as screws, and even lag bolts will be screwed into the drywall and then the studs. You might need to install anchors for your screws if you can’t hit studs as needed but that just makes an even larger hole.

You just can’t get away with making holes in the wall, if you want to hang your TV on it.

Luckily, however, the bracket itself and the TV will be covering the holes. Actually the holes will be filled until you decide to take down the TV wall mount.

I can tell you from experience that the damage made is necessary and is very easy to fix. A little bit of drywall mud and tape then some paint and the wall will be as good as new once again!

In conclusion, now you know:

I trust I was able to help you with your questions regarding screws and wall mounts. Now, let’s go shopping for that TV wall mount! Good luck!