Setting up your home theater is no easy feat.

With different seating options, room aesthetics, surround sound speaker systems, and equipment needs, there is a lot that goes into play in creating the perfect room. One tough decision can be where to place your projector.

To know how far can a projector be from the screen, you need to know the throw distance of the projector and then use the equation “Throw Distance” x “Screen Width” = “Distance of Projector from Screen” to measure.

Check out my top picks for home theater projector screens. 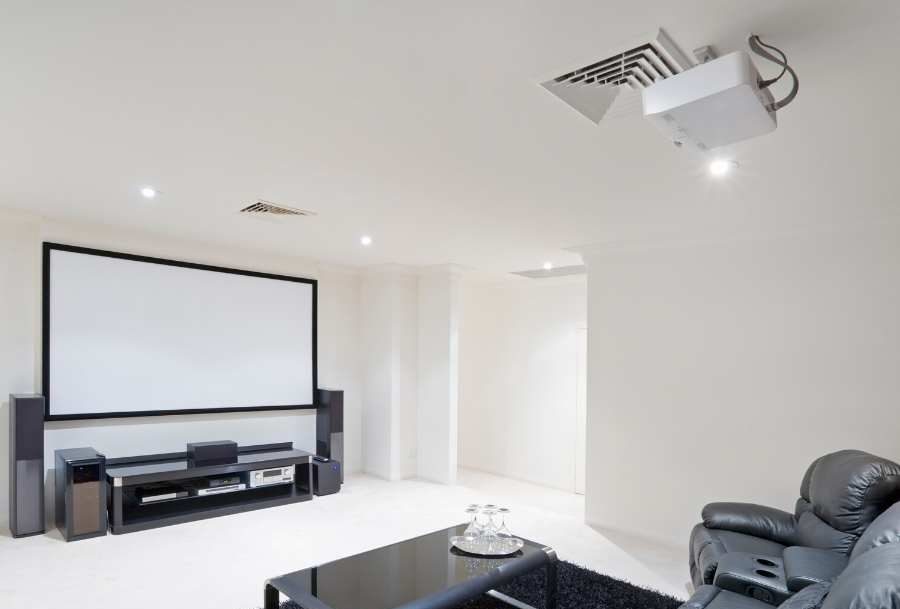 Example: 2.0 Throw Distance x Screen Width 87” = 174” from the center of Projector lens to Screen (measured at a 0 degree incline).

Of course, you can substitute the parts that you know or do not know into this equation to make your best measurements and more appropriately set up your home theater.

Regardless, you can know that the more effort you put into a well-designed home theater space, the better off your movie and sound quality will be creating the perfect home theater experience. Let’s take a closer look.

But before that, you may like to check out PC Mag’s top picks for home theater projectors in this article on Amazon.

What is the Throw Distance for a Projector?

When you are looking at how far a projector can be from the screen, you are going to notice how important it is to pay attention to the throw distance.

But, if you are unfamiliar with this term, then you might be curious as to how this affects the overall image quality that will be achieved based on the placement of your projector.

The throw distance of a projector can vary but is based on the unique projector’s specifications.

In concept, the throw distance measures the ideal spacing between the lens of the projector and the screen that will create the most optimal screen resolution. In reality, your projector’s throw distance can vary from model to model. 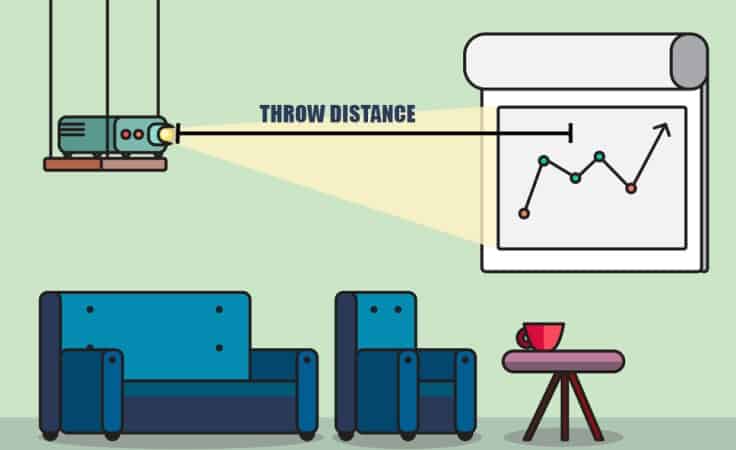 But, just because the throw distance varies does not mean that there are not industry standards. In fact, the majority of projectors maintain a relatively consistent throw distance between 1.5-3.0.

As an example, let’s assume your projector’s throw distance is a common industry standard of 2.0, and the measurements that you have in your home theater for the screen comes out to be 6 feet.

How Far Does a Projector have to be from a 120” Screen?

The placement of your projector now only changes the overall image quality that your projector is capable of producing, but it can change your room aesthetic as well.

If you have to move the seating in your home theater to make room for the stand that you intend on placing your projector on (unless it is an overhead projector), then this can end up having a pretty significant impact. So, knowing where to install it in the first place is important.

So, multiply the 120” width of your screen by the throw distance of your projector to know how far to place a projector from the screen.

When measuring from the projector to the screen, it is important that you measure at a 0 degree angle from the center (or close to it) of the projector lens to the wall.

If you measure at a sharp angle, you could end up distorting the dimensions that were used to calculate the throw distance.

It is important to note, though, that projectors vary from model to model, and the throw distance will too. Therefore, pay attention to the specifications on your projector of choice.

And, be sure to note if the lens can be adjusted without having to change the physical distance of the projector or screen as this can make the installation process much more simple.

Why is Appropriately Distancing Your Projector Important?

We have all been in a cinema and sat in the first row- our head tilted back as we strain to see the entire image. While this is enjoyable for some moviegoers, these seats are not often the first to go.

Not only does the strain on your neck become incredibly uncomfortable, but your ability to take in the entire image on the screen is limited.

A similar concept applies when you do not appropriately distance your projector from the screen.

You might not feel the strain in your neck if you do not have to bend backward to watch your favorite movie, but you could easily have to squint or try to adjust to see the screen more clearly if the distance is not appropriately calculated.

Setting up your projector at an appropriate distance from the screen not only prevents physical straining to see the best view of the media you are streaming, but it also enhances the overall quality of the image produced.

While different projectors have varying visual reproduction capabilities, you can still work with your device and your home theater space to create the most appealing option.

Of course, while some changes might be unnoticeable, there are others that would be largely impacted by a blurry or hyper-focused image.

Realistically, you want to work with your device and your space to be able to create the perfect balance in the distance you place between your projector and the screen. Then, you can enjoy the media you are streaming as it was intended to be viewed and enjoyed.

How Does the Distance of a Projector from the Screen Affect Image Quality? 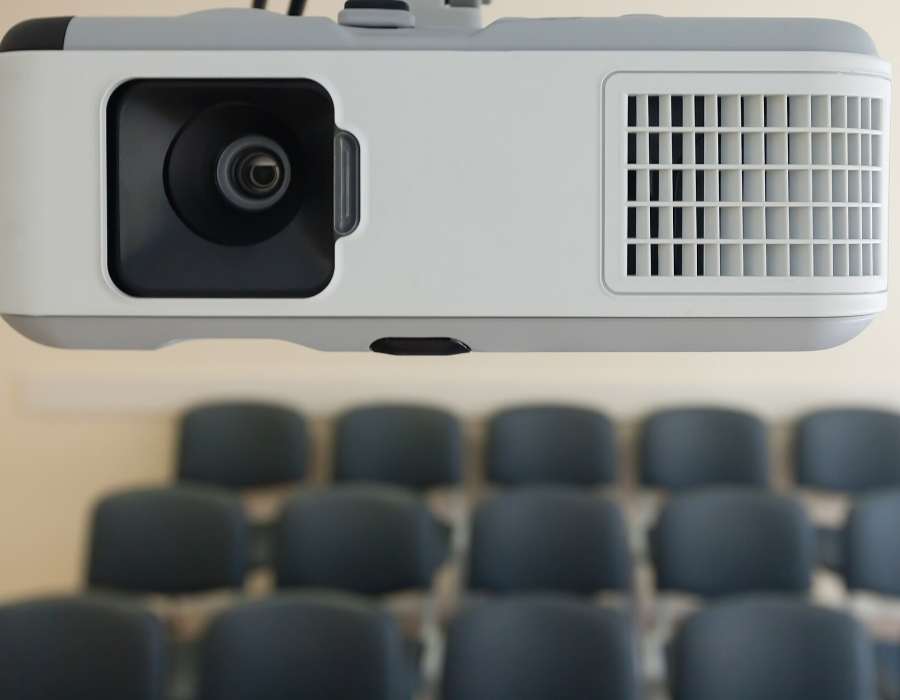 If you were to take your laptop or phone and place it within a few inches of your eyes to read this article, or if you were to place it across the room, it is obvious that these different distances would affect your ability to see the image- and thus alter the image quality for the viewer. In the instance of projectors and screens, a similar concept applies.

The distance of a projector from the screen affects the image quality by creating an ideal aspect ratio that can achieve a clear image. Considering the specifications of your projector may vary, as well as your home theater setup, you will need to measure the dimensions that are most accurate for your space.

Along these same lines, the quality of the projector will have much to do with the image quality that is being produced in line with the distance that the projector sits from the screen.

For example, if you are attempting to stream media in 4K or 1080p, but your projector is sitting too close to the screen, then the image might be too small to appreciate the fine quality and design that comes from these higher quality images.

On the contrary, if you were to sit your projector too far from the screen, then the technology and design that went into creating impeccable details through 4K or 1080p streaming could become unappreciated because the projection was being “thrown” in a way that was too blurry to appreciate the fine details.

So, as you attempt to install your projector in your home theater, it is important that you work with the distance and setup in your space as well as the requirements for the home theater. You can work from the details that you know and fill in the rest to create the perfect room.

In this case, then all you have to do is to complete the equation (“Throw Distance” x “Screen Width” = “Distance of Projector from Screen”) and choose a projector that offers the appropriate range of throw distance for your needs.

Either way, you can use the dimensions that you know and the design that you would like to incorporate to achieve the highest quality image possible with your equipment and home theater space.

Check out my top picks for: