Thin, flat-screen televisions cannot physically house high-quality speakers like their CRT (cathode-ray tube) cousins from the past did.

And considering the TV industry’s increased focus on display size and love for pixels, truly sophisticated flat-TV speakers could take some time to become a reality. Until then, a soundbar seems to be the only alternative – and a capable one at that, but where is it placed?

A soundbar is usually placed below a TV, but it’s also okay to mount it above a television set. Based on the model, the placement could determine the soundbar’s performance and how it looks. If the speakers are upward-firing, placing the soundbar above the TV will make a lot more acoustic sense. 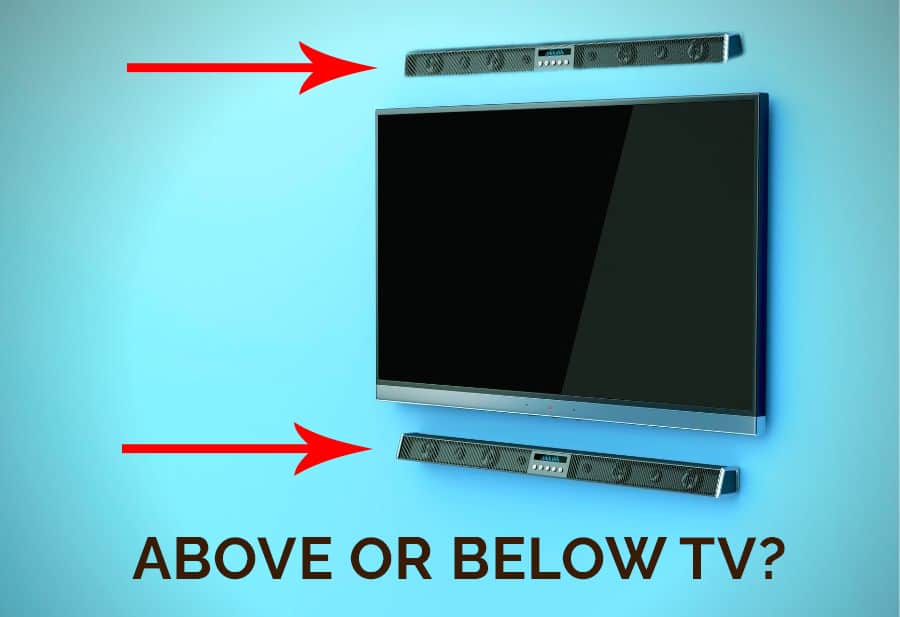 Keep reading to learn how the positioning of a soundbar – above or below a TV – could affect the audio experience. And if you’re considering mounting the soundbar vertically, you’ll also find out why that’s a bad idea.

A soundbar is more than just one thick flat slab with multiple built-in speakers. There are multiple design elements determining how the audio device performs, looks, and must be placed. For instance, it is built wide not just for mounting below or above a television or any device with a display, but also for acoustic reasons.

Though soundbars do not sound as great as more robust speakers, particularly in the music department, they are still significantly better compared to the built-in speakers of flat-screen TVs.

Generally, a soundbar has multiple speakers positioned within its unibody cabinet, which helps create the stereo and/or surround sound effect.

To supplement the soundbar, a separate subwoofer could be included in the box. Some manufacturers make soundbars with right, center, and left-positioned speakers to offer a wholesome audio experience.

A soundbar isn’t the only equipment to augment the audio performance of a flat-screen TV. You could, in fact, hook up your television with any audio setup of your liking – for instance, a conventional home theater system.

But most buyers prefer the soundbar over other similar products because soundbars are easy to install, occupy less space, are less expensive, come with minimal wires, etc.

Correct soundbar placement is imperative for optimal acoustical performance or audio output. You may place the audio device on a table, stand, cabinet, or any other piece of furniture, or you could mount the soundbar on a wall above or below your television.

It’s not just the soundbar model and the design, but a few other things also ascertain where the audio device gets positioned. Your room’s setting or decoration, your personal preference, etc. may be factors, for instance.

Reasons You Should Place the Soundbar Below a TV 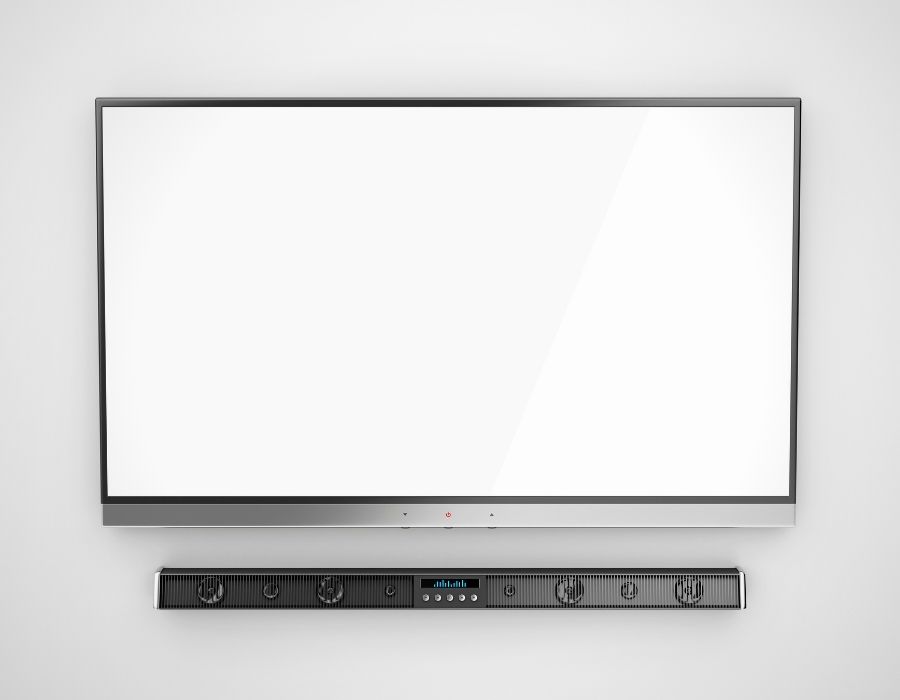 A soundbar usually sits in front of a TV or could be mounted to the wall below the television. Here are some reasons why it’s such a common practice.

Most soundbars are designed to be positioned below a TV. When these speakers are positioned above the TV instead, the setup will not look visually right. It could also feel as if the sound is flowing over your head, particularly if the speakers within the device are oriented to fire upwards.

When a soundbar is placed below the TV, it is likely to sit at or just below your eye level. This means the audio travels directly to you.

There is no sideway scattering or reflection off the ceiling, which results in less echo and a much better audio experience overall. All this is provided, and the soundbar goes under a TV by default or has standard front-firing speakers.

Soundbars can be wireless or wired. If there are cables to work with, the soundbar could be placed as far as the length of the cable. The cable is usually not more than 33 feet (10 meters). Cables made of glass fibers could be longer than 10 meters. A 3.5mm copper connection would work at approximately 20 feet with a shielded cable.

The necessary connectors are usually close to the TV’s bottom. Therefore, when placed under a TV, setting up and wiring a soundbar becomes less complicated. Not to mention, concealing the wires is also quite straightforward when the soundbar is placed in front of or under the TV. The cable could be run via a concealment channel, for instance.

If you are mounting the soundbar under the TV and would like some help with hiding the soundbar’s cables without causing them any damage, watch this video:

A soundbar is meant to be mobile. Ideally, you shouldn’t be mounting it against your wall. When placed below the TV on a stand, you can get away with not mounting the soundbar. That is not so when the soundbar goes above the TV.

Even if you were to simply place it on a glass or wood stand above the TV, you would have to mount the stand, to begin with.

Also, when a soundbar is laid flat on the TV table, you may not worry about a piece of locked-in equipment. You may easily bring the audio device forward or push it backward.

When mounting a soundbar above the TV, however, finding the right spot is critical. This means a lot of testing would be needed to determine the perfect spot. Not to mention, setting up the mount is some serious work.

Reasons You Should Mount the Soundbar Above a TV

As mentioned above, a soundbar is usually placed under a TV. But there are instances when a below-TV soundbar positioning may not be ideal.

Upward-Firing Soundbar Speakers Must Go Above the TV

Soundbars with upward-firing speakers are not meant to be placed below or in front of the TV. These soundbars should be set up a certain way to reflect sound off the ceiling to take full advantage of the room’s acoustics.

These models are, in fact, designed to use the walls and ceilings of a physical space to produce a significantly more immersive soundstage.

They are, in fact, invariably equipped with Dolby Atmos technology.

Placing the soundbar below the TV would inhibit the sound from reaching the ceiling and bouncing off it, thereby not creating the desired effect. Having said that, make sure the soundbar is not positioned too close to your room’s ceiling as the sound may then not ricochet as it should.

When a soundbar is positioned below a TV, particularly when placed very close to the TV’s bottom bezel, it could end up coming in between your TV remote and the remote sensor on the TV. Placing the external speaker above the TV could negate this issue.

If you insist on positioning the soundbar below your TV, however, make sure the soundbar is fairly thin, or the TV is mounted high enough.

The TV’s height on its stand could be altered, or the TV could also be mounted at a greater height to mitigate this issue. But if the TV could be pushed vertically only to an extent and/or you don’t want to mount the TV, you may have to be absolutely certain about the soundbar’s thickness.

The last thing you would want is getting up from the couch or raising your arm every time you need to change the channel or TV settings.

If the television is positioned slightly below eye level, mounting a soundbar above the TV would make both aesthetic and acoustic sense. A TV could be placed at a lower height than normal if the seating arrangement or the couch is close to floor height. Positioning the soundbar below the TV won’t be ideal in such scenarios.

Can You Position the Soundbar Vertically?

It’s okay to mount a soundbar vertically during rare occasions, but it’s not recommended. Soundbars are purpose-designed to project sound in a particular way or direction. When a soundbar is rotated 90 degrees or to its side, the right and left speaker channels may sound as if they are coming from the floor and ceiling.

Needless to say, this would completely ruin the audio experience.

As mentioned earlier, mounting a soundbar vertically is not completely ruled out. It, however, should be your last resort or when all other placement options have been tried, and they didn’t work out.

For some people, vertical soundbar positioning may be unavoidable – perhaps for aesthetic reasons and/or space constraints. At times, existing wall mount positioning and furniture could leave too little space to place a soundbar horizontally.

Even in such cases, it’s recommended to embark on a mini home repair project or swap out the furniture rather than settling down with vertically positioned speakers.

Horizontally placing a soundbar is usually an issue when the audio equipment is purchased with little to no thought given to the room or existing furniture. Though you shouldn’t be spending a lot of money on a soundbar, you must also not cheap out to the extent of buying an audio device not right for your space.

Theoretically speaking, the horizontal mount could be tilted 90 degrees to make its orientation vertical. However, it won’t work out in practice as soundbar mounts are specifically designed to distribute the soundbar’s weight in the horizontal orientation. When a soundbar is mounted sideways or vertically, it won’t just cause damage to the device but possibly the wall too. 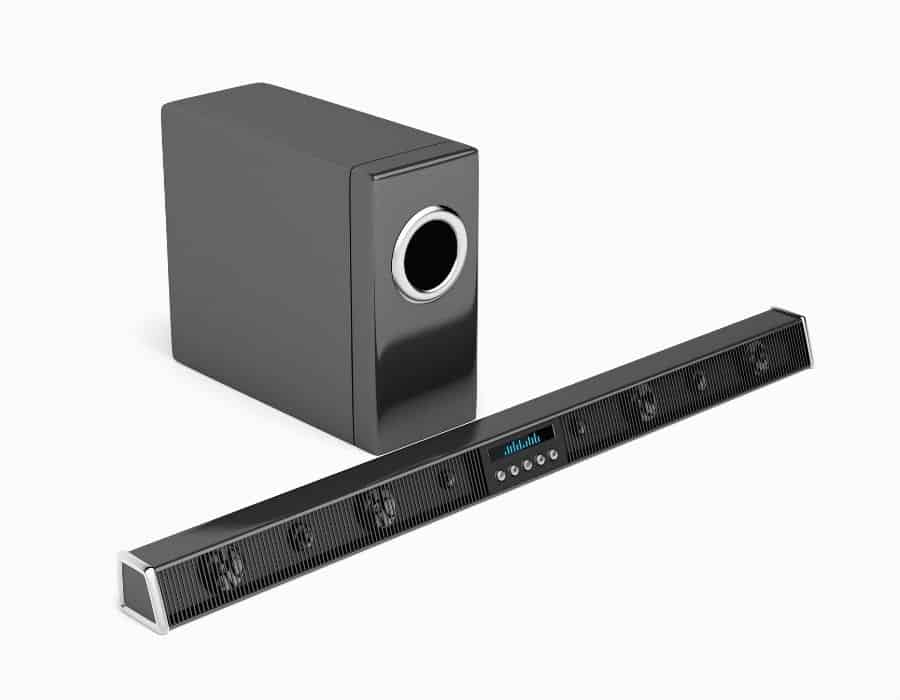 If you know beforehand or you’ve already decided where the soundbar would go near the TV, shopping will become easier.

If you are considering mounting your soundbar, look for a device with specific mounting features, rear-positioned keyholes for brackets, etc. But if you would be placing it instead, mounting-friendly attributes are not required. A basic long bar with zero keyholes would do the job.

Here are a few other things that you should consider when shopping for or placing/mounting the soundbar:

Most people like their soundbar marginally below ear level and the television a tad above eye level. However, there are instances when the reverse could create better results, like in theaters where the floor or chairs slant upwards.

Whether to place the soundbar below or above the TV shouldn’t be the question. Is your soundbar designed to be put under or below your television is what you should be considering and be sure of. If the soundbar has upward-firing speakers, it is meant to be placed above the TV.

You may still position the speaker below the TV, but the audio quality may take a discernible hit.

Always find out what the product’s user manual says about placement. If the soundbar has specific requirements, those would have been mentioned in the product’s technical documents. When there is nothing mentioned specifically, go ahead and place the bar on the TV stand.

Check out my top recommended soundbars.