There are many different types of HDMI connections available to us, five in fact. However, we only utilize three of those five, and two of them are the mini and micro HDMI connection types.

The only difference between a Mini HDMI and a Micro HDMI is in terms of size. Mini HDMI cables are smaller making them available more so for mobile and smaller devices. Both support and have the full capability of a standard type A HDMI connection type and both connections even feature the same amount of pins (19). 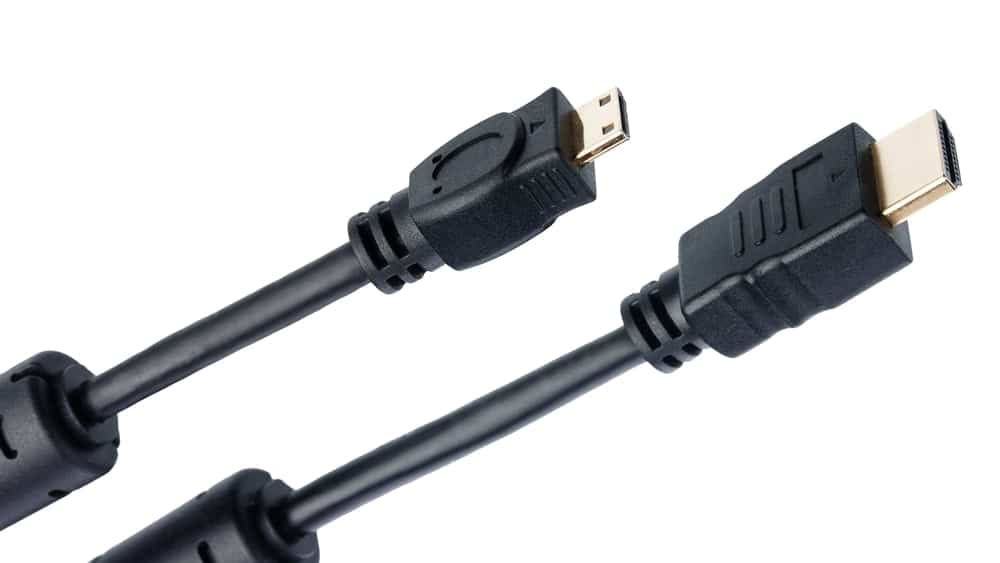 Even though it seems like there are no differences between a mini and micro HDMI connection type, there is a basis to why we have them, so there are a few factors we have to consider, and then we can make a valid comparison between the two.

Moreso, we will look at the different versions of HDMI and then compare mini and micro HDMI connection types to a standard HDMI connection type for greater clarity on their differences. Finally, we end off with links to the best HDMI cables and converters for your perusal.

Also read: What Is an HDMI Audio Extractor and How Does It Work?

High-definition Multimedia Interface (HDMI) is a type of interface that is used for transmitting both very high-quality audio and then high-quality video over a cable.

The data HDMI transfers in terms of audio can be uncompressed or compressed and then uncompressed video data. HDMI was released in 2002, and since then, approximately over four billion AV devices have been sold, with HDMI being one method of connectivity as part of its connection types.

We can even go as far as saying that HDMI is now that standard interface type when connecting AV devices to one another.

HDMI is used to connect one AV device to another, and in today’s digital world, you can find them on almost any AV devices, some of which include TVs, DVD players, Blu Ray players, PCs, Laptops, MACs, Xbox, Play Station, Apple TV, and more to other AV sources

HDMI’s formats and standards are LPCM uncompressed audio and then EDID, which control and run the audio and video quality of HDMI.

HDMI uses various audio and video codecs since its inception changing and adapting with each new version, and we are now on HDMI version 2.1.

Mini and micro-HDMI cables have only been around since particular HDMI versions, specifically versions 1.3 and 1.4. Let’s look at these versions, see why they were introduced, how they affected HDMI, and whether they affect mini and micro HDMI cables.

Here are the different versions of HDMI.

This was the initial release of HDMI, which was in December 2002. This version was based on the link architecture from DVI and used the exact same video transmission format. The audio signals and other auxiliary data was sent during blanking intervals of the stream.

At this point, both DVI and HDMI could send the same amount of data, which was a maximum TMDS clock of 165Mhz. That correlates to 4.95Gbps.

This update to HDMI was minor, and it included the support for high-quality DVD-audio.

This version was released in 2005 and had the added option of One Bit Audio used on SACD (Super Audio CDs), which supported up to eight audio channels.

This version removed the explicitly supported formats for video, which was before limited to pre-defined formats. This meant that manufacturers were able to make HDMI compatible with any arbitrary resolution they deemed fit for their product. This was great for PC users because devices with an RGB output (a computer) did not require YCbCr support.

This version was released in December of 2005, and it supported CEC (consumer Electronic Control) features.

Released in June 2006, this version of HDMI supported an increased maximum TMDS clock that ran at 340Mhz (which correlates to 10.2Gbps). The color depth increased to 10, 12, and 16bpc and was called Deep Color. It also had the added ability to carry metadata defining color gamut boundaries.

This version allowed the output of Dolby TrueHD and DTS-HD Master Audio for external decoding by AV devices. It also incorporated automatic audio syncing; this version saw the release of the type C connector (the mini HDMI).

This version was released in November of 2006, which saw Cable and Sync modifications, source termination, and removed varying rise and fall time limits for the type C connector. Among many other features, it also included the ability to stream SACD in bitstream DST format.

Astoundingly it included HEC, which is an Ethernet channel that can accommodate 100Mbs. This would allow two devices connected via an HDMI cable that ran version 1.4 to share an internet connection.

Also introduced in this version was an ARC (audio return channel), 3D capability, an expanded set of color spaces, and the micro HDMI connector (or type D connector).

Released in 2010, it added two compulsory 3D video formats. This was slightly different from version 1.4, which required and implemented 3D frame packing (two separate images either side-by-side or top and bottom with resolutions of 720×1080).

October 2011 saw the release of version 1.4b. This version only contained minor clarifications to the 1.4a versions document. The HDMI forum created with this version’s release is responsible for releasing all future versions of HDMI.

This version on HDMI saw some massive upgrades with regards to quality and features. Released in 2013, it supported a maximum bandwidth of 18Gbps, and it uses TMDS video encoding like the previous versions, which allows for video bandwidth of up to 14.4Gbps.

This will enable HDMI to push 4k video at 60Hz at a 24bit color depth. It integrated HE-AAC and DRA audio standards as well as supporting up to 32 audio channels.

Other features included dual streaming (which meant multiple users could watch on the same screen), chroma subsampling, new supported aspect ratios like 21:9, and dynamic synchronization of audio and video.

High Dynamic Range (HDR) support (including metadata) was in the release of this version of HDMI, which came out in 2015.

Released in 2016, this version included Hybrid Log-Gamma (HLG), which is a type of static metadata signaling. It still supported the same HDR10 standard as the initial 2.0 HDMI version, however.

Coming to our latest version, which is 2.1, we need to realize that there have only been two primary standards which most AV devices were built around, and those are versions 1.4 and versions 2.1.

One thing to note is that the more data that can go through your cable (in this case, an HDMI cable), the higher the resolution, frame rate, and audio quality will be. Now HDMI version 1.4 is still found and is still widely used today, and as we said, it pushes data at 10.2Gbps.

What other types of HDMI connectors do you get? 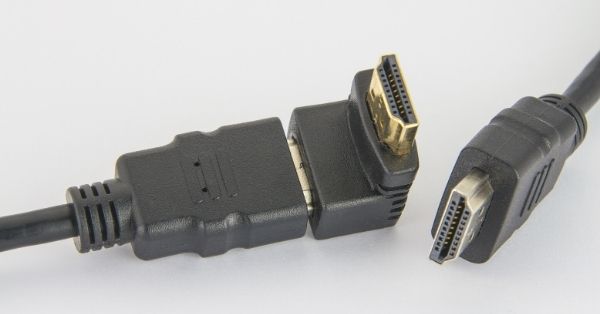 It should be noted that there are two more types of connectors for HDMI, which are type B and Type E.

Type B HDMI was a connection type that would have featured 29 pins and high-speed data transfers. However, before its implementation, HDMI version 1.3 was introduced, and it featured greater speed, and more features than type B would have catered for; hence it was discontinued and never released.

Type E HDMI is a connector used in the automotive industry and features a locking tab to keep it in place and has a shell that helps prevent moisture and dirt from interfering with signals.

These two connection types are beyond this article’s scope, so let’s get back to mini and micro HDMI cables.

As we now know, micro and mini HDMI connectors were introduced in versions 1.3 and 1.4. Now you may think that those types of connectors (type C and type D) would only be available with those specific versions of HDMI; however, this is not the case.

All HDMI cables, including type A (the standard sized version of an HDMI cable), type C, and type D, will have all 19 pins.

Besides the fact that all three types come with the same amount of pins that relay the same information, micro and mini HDMI connectors are not bound to versions 1.3 and 1.4. You are able to get mini and micro HDMI cables in versions 1.4 and above, just like regular type A HDMI cables.

The primary differences between regular type A HDMI, mini (type C) HDMI, and micro (type D) are their size differences.

They all feature the same speed, features, and functions (granted, they are identical versions, of course).

Here is a table comparison for a better view;

Why do you need mini and micro HDMI cables? 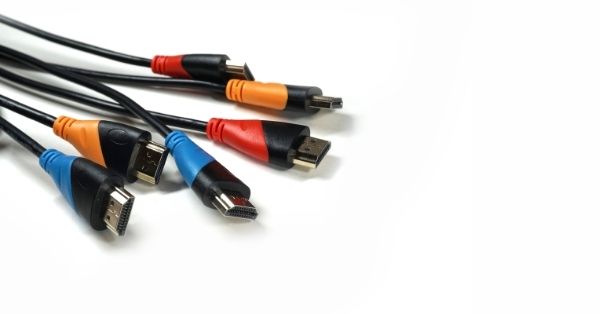 So why do we need various types of connectors? Well, the reason is because of specific devices. A standard HDMI cable is fine when connecting normal-sized AV devices to one another, like your Xbox to TV or DVD player, Blu-ray player, Amazon Fire TV Stick, and such.

However, the problem comes in when you get compact mobile devices that need to utilize HDMI. They are not able to use the standard sized HDMI connectors because they are just too large.

One thing to note is that USB type C is now more universal in the smartphone arena, and micro HDMI has all but been abandoned except for devices that need better quality playback, such as action cameras.

Can you interchange standard, micro, and mini HDMI connectors?

Due to the fact that all the connection types are identical in terms of their design and functionality, one connection type can convert to the other without any problems or loss of data.

Both methods work perfectly fine, and they are pretty much the same thing. It will all depend on what HDMI cable you have and what device you need to plug it into, and perhaps the availability of space you have regarding each device.

Coming to our conclusion, we discover that HDMI has been around for almost two decades, implementing different versions. Each version, increasing its capability and functionality with regards to video and audio data transfers.

Furthermore, we have smaller versions of an HDMI connector because smaller devices, mobile devices, and devices specifically made utilize them because they cannot support the seemingly large type A standard connection type.

Finally, we discovered that it is pretty simple if you need to convert one connection type to another. You do this by purchasing the correct cable or by buying a converter cable.